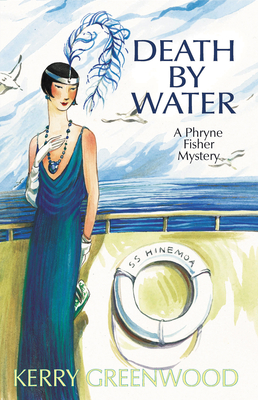 This is book number 15 in the Phryne Fisher Mysteries series.

The nice men at P&O are worried. A succession of jewelry thefts from the first-class passengers is hardly the best advertisement for their cruises. Especially when it is likely that a passenger is the thief. Phryne Fisher, with her Lulu bob, green eyes, cupid's bow lips, and sense that the ends justify the means, is just the person to mingle seamlessly with the upper classes and take on a case of theft on the high seas or at least on the S.S. Hinemoa, on a luxury cruise to New Zealand. She is carrying the Great Queen of Sapphires, the Maharani, as bait. Shipboard romances, champagne cocktails, erotic photographers, jealous swains, Mickey Finns, jazz musicians, blackmail, and attempted murder mingle before the thieves find out, as have countless love-smitten men before them, that where the glamorous and intelligent Phryne is concerned, resistance is futile.

“Cleverly plotted and one of one of Greenwood's best in this long-running historical series.”

–Library Journal of Murder on a Midsummer Night

“Phryne's devoted following will rejoice as she glides through dangerous situations and survives the sizzling summer in inimitable style.”  –Kirkus Reviews of Murder on a Midsummer Night

“Phryne on the rampage makes for fine entertainment all on its own, but Greenwood effectively combines her inimitable heroine's antics with thought-provoking details about the struggles of women in the 1920s, forced to adjust to the loss of the unprecedented independence they had enjoyed during the war. This series is the best Australian import since Nicole Kidman, and Phryne is the flashiest new female sleuth in the genre.”         –Booklist Starred Review of Away With the Fairies