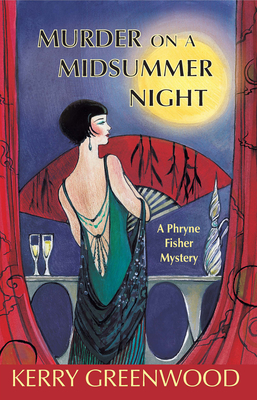 This is book number 17 in the Phryne Fisher Mysteries series.

The Hon. Phryne Fisher, languid and slightly bored at the start of 1929, has been engaged to find out if the antique-shop-owning son of a Pre-Raphaelite model has died by homicide or suicide. He had some strange friends--a Balkan adventuress, a dilettante with a penchant for antiquities, a Classics professor, a medium, and a mysterious supplier who arrives after dark on a motorbike. Simultaneously, she is asked to discover the fate of the lost illegitimate child of a rich old lady, to the evident dislike of the remaining relatives.

With the help of her sister Beth, the cab drivers Bert and Cec, and even her two adoptive daughters, Phryne follows eerie leads that bring her face-to-face with the conquest of Jerusalem by General Allenby and the Australian Light Horse, kif smokers, spirit guides, pirate treasure maps, and ghosts.

“Cleverly plotted and one of one of Greenwood's best in this long-running historical series.”

–Library Journal of Murder on a Midsummer Night

“Phryne's devoted following will rejoice as she glides through dangerous situations and survives the sizzling summer in inimitable style.”  –Kirkus Reviews of Murder on a Midsummer Night

“Phryne on the rampage makes for fine entertainment all on its own, but Greenwood effectively combines her inimitable heroine's antics with thought-provoking details about the struggles of women in the 1920s, forced to adjust to the loss of the unprecedented independence they had enjoyed during the war. This series is the best Australian import since Nicole Kidman, and Phryne is the flashiest new female sleuth in the genre.”       –Booklist Starred Review of Away With the Fairies