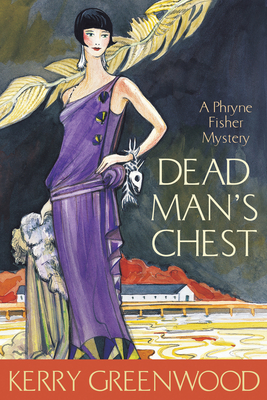 This is book number 18 in the Phryne Fisher Mysteries series.

Dot unfolded the note. "He says that his married couple will look after the divine Miss Fisher...I'll leave out a bit...their name is Johnson and they seem very reliable." Phryne got the door open at last. She stepped into the hall. "I think he was mistaken about that," she commented.

Traveling at high speed in her beloved Hispano-Suiza with her maid and trusted companion Dot, her two adoptive daughters Jane and Ruth, and their dog Molly, Phryne Fisher is off to Queenscliff. She'd promised everyone a nice holiday by the sea with absolutely no murders, but when they arrive at their rented accommodation that doesn't seem likely at all.

An empty house, a gang of teenage louts, a fisherboy saved, and a missing butler and his wife seem to lead inexorably toward a hunt for buried treasure by the sea. Phryne knows to what depths people will sink for greed, but with a glass of champagne in one hand and a pearl-handled Beretta in the other, no one is getting past her.