Wisdom of the Watchers: Teachings of the Rebel Angels on Earth's Forgotten Past (Paperback) 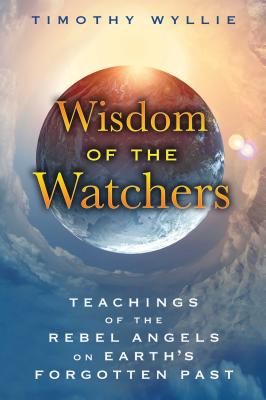 Writing together with Timothy Wyllie, the angel Georgia details the events of Earth’s ancient history from 39,000 BC to 16,500 BC

• Chronicles the destruction of Lemuria, the Pleiadian evacuation of Earth, and the Lemurian diaspora that spread to India, Tibet, China, and South America

• Explains angelic esoteric science, such as the link between spiritual centers on higher planes and ancient monuments on Earth, including the Giza pyramids

• Interwoven throughout with observations about Timothy Wyllie’s current and previous lives, such as his long involvement with the Process Church and his interactions with rebel angel incarnates like Timothy Leary

At the time of the revolt among the angels 203,000 years ago, Georgia was among those angels who aligned themselves with Lucifer and the rebels. She has remained on this world with occasional side trips to Zandana, another planet of quarantined rebel angels, since the time of the revolution, taking on the angelic role of Watcher. Writing together with Timothy Wyllie, Georgia provides her personal account of the period on Earth from 39,000 BC to 16,500 BC.

Georgia shares her experiences being present as the Lemurian civilization in the Pacific reached its pinnacle and seismic upheavals overwhelmed its island home of Mu. She describes the elaborate Pleiadian evacuation operation and the Lemurian diaspora, explaining how their belief system took root in India, Tibet, China, and South America. She reveals how the emerging Atlantean civilization, now also collapsed, preyed on the far flung settlements of the Lemurian empire. She explains angelic knowledge of esoteric science, such as the spiritual influence of Venus and the link between spiritual centers on higher planes and ancient monuments on Earth, including the Giza pyramids. Georgia interweaves her story with observations about Timothy Wyllie’s current and previous lives, such as his long involvement with the Process Church and his interactions with other a rebel angel incarnates like Timothy Leary.

Georgia shares her words, in part, to awaken some of the 100 million rebel angels currently living their human lives, most unaware of their angelic heritage. She reveals how a mortal incarnation for a rebel angel is an opportunity to redeem her past and help prepare the way for the imminent transformation of global consciousness as the rebellion planets, including Earth, are welcomed back into the Multiverse.

Timothy Wyllie (1940-2017) was born in Great Britain and raised in London. Having wended his way through an English public school education and then seven years further study at college, he qualified as an architect. In the late 70s, Timothy began a systematic exploration of out-of-body states. This led to experiments in telepathic communication with dolphins and an open invitation to contact with nonphysical beings that continues to this day. During this time, he was also running his own business in New York City, marketing a system he had co-devised for storing and filing color photographs. He retired from the business community in 1981 and turned full time to his creative endeavors. As a musician, Timothy made several tapes of what he called "Bozon Music"--a True Age improvisational jazz, shamanic music of the heart--as well as a series of guided visualization and meditation tapes. Also an artist, he worked on a virtually endless progression of drawings of sacred landscape. It was what brought him most joy. Timothy traveled frequently to give lectures and seminars or to investigate sites and locations for his drawings. He is the author of Ask Your Angels: A Practical Guide to Working with the Messengers of Heaven to Empower and Enrich Your Life, Dolphins, ETs & Angels, the Rebel Angels series of books featured below, and a co-author of Adventures Among Spiritual Intelligences: Angels, Aliens, Dolphins & Shamans.

“Timothy Wyllie’s Wisdom of the Watchers is an enthralling read. Wyllie is an eloquent author with a discerning wisdom of the world. This book has the benefit of being practical and enlightening like a wonderful intertwined subjective journey. Truly awe inspiring.”
— E. A. James Swagger, author of The Newgrange Sirius Mystery and Capricorn RadioTV host

"The big message is - we are not alone. There are more advanced civilizations, there are less advanced, but for incarnate rebel angels there is the chance to experience mortal life and eventually take their rightful place in the Multiverse – and who knows what comes after that. The whole series is thought provoking. . . Recommended for incarnate rebel angels and other seekers."
— New Dawn, Jennifer Hoskins, January 2016

“In this book Timothy Wyllie and his guide, Georgia, continue the deep revelations of the hidden histories and lost legacy originally detailed in The Urantia Book. Wisdom of the Watchers is the nexus of a history and destiny that is both personal and universal.”
— Randy Maugans, OffPlanet Radio host