Revelations of the Watchers: The Unfolding Destiny of the Rebel Angels (Paperback) 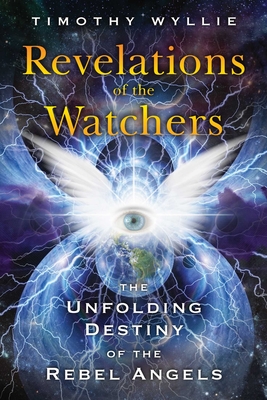 Writing together with Timothy Wyllie, the angel Georgia details the events of Earth’s ancient history during the second era of Atlantis

• Explores the rise of shamanism, the hidden history of Akhenaten, and the privileged role of the Yazidi people in the spiritual evolution of the planet

During the angelic rebellion 203,000 years ago, which led to the quarantine of Earth and 36 other planets from the Multiverse, Georgia, an angel of Seraphic status, aligned herself with Lucifer and the rebel angels. After the rebellion, Georgia was permitted to remain on this planet and become a Watcher. Writing together with Timothy Wyllie, in this book Georgia provides her personal account of Earth during the second rise of Atlantis.

Georgia explains how the new Atlantis was home to the few surviving Lemurians and was rebuilt using ancient Lemurian construction techniques. She reveals how Prince Caligastia put Poseidon in charge of the new Atlantis in order to keep him from interfering with the Prince’s imposition of monotheism in southern Palestine. She explores the rise of shamanism through the entheogenic use of power plants -- first on the Islands of Mu, then in the Nile Valley, and later among the Aborigines of Australia. She also looks at the hidden history of Pharaoh Akhenaten and the privileged role of the Yazidi people in the spiritual evolution of the planet--and how even today the attempts to extinguish their culture is the work of Caligastia’s agents.

Interwoven with Georgia’s narrative of Earth’s ancient history are her observations of Timothy Wyllie’s current and previous lives, including his involvement with the Process Church, his struggle to leave it, and his spiritual activities after he left. Through her revelations, Georgia exposes the supreme significance of Earth in the larger Multiverse and how our planet is one of the worlds on which the rebel angels have been accorded the privilege of a mortal incarnation. Georgia shares her words, in part, to awaken the 100 million rebel angels currently living their human lives. She reveals how a mortal incarnation for a rebel angel is an opportunity to redeem their past and help prepare for the imminent transformation of consciousness as the rebel-held planets, including Earth, are welcomed back into the Multiverse.

Timothy Wyllie (1940-2017) was born in Great Britain and raised in London. Having wended his way through an English public school education and then seven years further study at college, he qualified as an architect. In the late 70s, Timothy began a systematic exploration of out-of-body states. This led to experiments in telepathic communication with dolphins and an open invitation to contact with nonphysical beings that continues to this day. During this time, he was also running his own business in New York City, marketing a system he had co-devised for storing and filing color photographs. He retired from the business community in 1981 and turned full time to his creative endeavors. As a musician, Timothy made several tapes of what he called "Bozon Music"--a True Age improvisational jazz, shamanic music of the heart--as well as a series of guided visualization and meditation tapes. Also an artist, he worked on a virtually endless progression of drawings of sacred landscape. It was what brought him most joy. Timothy traveled frequently to give lectures and seminars or to investigate sites and locations for his drawings. He is the author of Ask Your Angels: A Practical Guide to Working with the Messengers of Heaven to Empower and Enrich Your Life, Dolphins, ETs & Angels, the Rebel Angels series of books featured below, and a co-author of Adventures Among Spiritual Intelligences: Angels, Aliens, Dolphins & Shamans.