Currency Wars: The Making of the Next Global Crisis (Paperback) 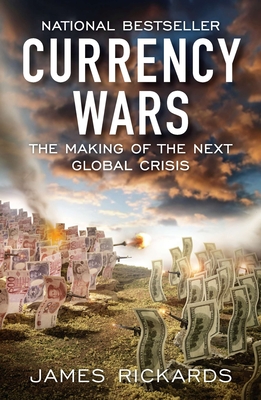 In 1971, President Nixon imposed national price controls and took the United States off the gold standard, an extreme measure intended to end an ongoing currency war that had destroyed faith in the U.S. dollar. Today we are engaged in a new currency war, and this time the consequences will be far worse than those that confronted Nixon.

Currency wars are one of the most destructive and feared outcomes in international economics. At best, they offer the sorry spectacle of countries' stealing growth from their trading partners. At worst, they degenerate into sequential bouts of inflation, recession, retaliation, and sometimes actual violence. Left unchecked, the next currency war could lead to a crisis worse than the panic of 2008.

Currency wars have happened before-twice in the last century alone-and they always end badly. Time and again, paper currencies have collapsed, assets have been frozen, gold has been confiscated, and capital controls have been imposed. And the next crash is overdue. Recent headlines about the debasement of the dollar, bailouts in Greece and Ireland, and Chinese currency manipulation are all indicators of the growing conflict.

As James Rickards argues in Currency Wars, this is more than just a concern for economists and investors. The United States is facing serious threats to its national security, from clandestine gold purchases by China to the hidden agendas of sovereign wealth funds. Greater than any single threat is the very real danger of the collapse of the dollar itself.

Baffling to many observers is the rank failure of economists to foresee or prevent the economic catastrophes of recent years. Not only have their theories failed to prevent calamity, they are making the currency wars worse. The U. S. Federal Reserve has engaged in the greatest gamble in the history of finance, a sustained effort to stimulate the economy by printing money on a trillion-dollar scale. Its solutions present hidden new dangers while resolving none of the current dilemmas.

While the outcome of the new currency war is not yet certain, some version of the worst-case scenario is almost inevitable if U.S. and world economic leaders fail to learn from the mistakes of their predecessors. Rickards untangles the web of failed paradigms, wishful thinking, and arrogance driving current public policy and points the way toward a more informed and effective course of action.

James Rickards is the Editor of Strategic Intelligence a financial newsletter. He is The New York Times bestselling author of The New Great Depression (2020), Aftermath (2019), The Road to Ruin (2016), The New Case for Gold (2016), The Death of Money (2014), and Currency Wars (2011) from Penguin Random House. He is an investment advisor, lawyer, inventor, and economist, and has held senior positions at Citibank, Long-Term Capital Management, and Caxton Associates. In 1998, he was the principal negotiator of the rescue of LTCM sponsored by the Federal Reserve. His clients include institutional investors and government directorates. He is an op-ed contributor to the Financial Times, Evening Standard, The Telegraph, New York Times, and Washington Post, and has been interviewed by BBC, CNN, NPR, CSPAN, CNBC, Bloomberg, Fox, and The Wall Street Journal. Mr. Rickards is a guest lecturer in globalization and finance at The Johns Hopkins University, Georgetown University, Trinity College Dublin, The Kellogg School at Northwestern, the U.S. Army War College and the School of Advanced International Studies. He has presented papers on risk at Singularity University, the Applied Physics Laboratory, and the Los Alamos National Laboratory. He is an advisor on capital markets to the U.S. intelligence community, and the Office of the Secretary of Defense, and is on the Advisory Board of the FDD Center on Economic and Financial Power in Washington DC. Mr. Rickards holds an LL.M. (Taxation) from the NYU School of Law; a J.D. from the University of Pennsylvania Law School; an M.A. in international economics from SAIS, and a B.A. (with honors) from Johns Hopkins. He lives in New Hampshire.

“One of the scariest books I’ve read this year. The picture that emerges is dark yet comprehensive and satisfying.” — Bloomberg Businessweek

“One of the most urgent books of the fall.” — Mike Allen, Politico

“Unsettling…fascinating…a thorough analysis of how nations have manipulated their currencies…with disastrous consequences.” — Fort Worth Star-Telegram