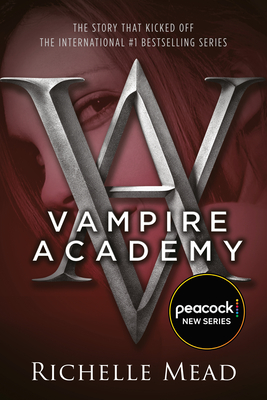 This is book number 1 in the Vampire Academy series.

**Read the book and watch the original TV series, now streaming on Peacock!**

Join the legion of fans who skyrocketed this six-book series to the top of the charts. Start here, with the first book that kicked off the international #1 bestselling Vampire Academy series.

Love and loyalty run deeper than blood. St. Vladimir’s Academy isn’t just any boarding school—it’s a hidden place where vampires are educated in the ways of magic and half-human teens train to protect them. Rose Hathaway is a Dhampir, a bodyguard for her best friend Lissa, a Moroi Vampire Princess. They’ve been on the run, but now they’re being dragged back to St. Vladimir’s—the very place where they’re most in danger. . . .

Rose and Lissa become enmeshed in forbidden romance, the Academy’s ruthless social scene, and unspeakable nighttime rituals. But they must be careful lest the Strigoi—the world’s fiercest and most dangerous vampires—make Lissa one of them forever.

“We’re suckers for it.” — Entertainment Weekly

Richelle Mead graduated from the University of Michigan and has an M.A. in Comparative Religion from Western Michigan University. She currently lives in Seattle with her husband, and is at work on her next VAMPIRE ACADEMY novel.

“We’re suckers for it.” —Entertainment Weekly

“Richelle Mead's Vampire Academy saga is set to be the next young adult paranormal series to become a household name.” —The Huffington Post

“…Mead knows her folklore, using it to great advantage in crafting a credible back story for the friction between her good and evil vampires.” —The Miami Herald

“Vampire Academy is on an entirely different playing field than Twilight…Rose shows no signs of codependency; she’s the Sasha Fierce of Vampires, kicking ass and taking names.” —Miami New Times

“[The Vampire Academy series] improves with each installment, as [Mead] keeps readers on the edge of their seats while adding unexpected twists.” —Associated Press

“Vampire Academy…is taking a bite out of the publishing world.” —Associated Press

“…Vampire Academy heroine Rose Hathaway [is] a combination of Buffy the Vampire Slayer and Angelina Jolie in Tomb Raider.” —The Seattle Times