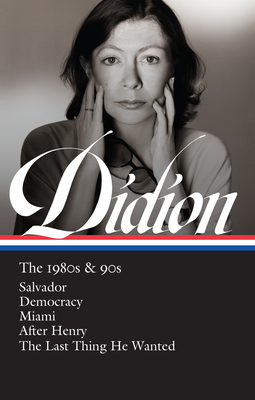 This second volume in Library of America's definitive Didion edition includes two novels and three remarkable essay collections with which she extended the compass of the extraordinary journalistic eye first developed in the celebrated books Slouching Towards Bethlehem and The White Album. Gather here are Salvador, a searing look at terror and Cold War politics in the Central American civil war of the early 1980s; Miami, a portrait not just of a city but of immigration, exile, the cocaine trade, and political violence; and After Henry, in which she reports on Patty Hearst, Nancy Reagan, the case of the Central Park Five, and the Los Angeles she once called home. The novels Democracy and The Last Thing He Wanted, the latter recently adapted for film by Netflix, are fast-paced, deftly observed narratives of power, conspiracy, and corruption in American political life. Taken together, these five books mark the remarkable mid-career evolution of one of the most dynamic writers of our time.

Joan Didion (1934—2021) was one of the most distinct American literary voices of the last half century. She was the author of five novels and ten books of nonfiction, including Slouching Towards Bethlehem, The White Album, Play It As It Lays, and mostly recently the New York Times best sellers The Year of Magical Thinking, Blue Nights, South and West, and Let Me tell You What I Mean. She was the recipient of numerous awards, including the National Book Award for Nonfiction and the National Book Foundations' Medal for Distinguished Contribution to American Letters.

David L. Ulin is the author or editor of ten books, including Sidewalking: Coming to Terms with Los Angeles; the Library of America's Writing Los Angeles: A Literary Anthology, which won a California Book Award; and The Lost Art of Reading: Books and Resistance in a Troubled Time. The former book editor and book critic of the Los Angeles Times, he teaches at the University of Southern California.