The State of the American Mind: 16 Leading Critics on the New Anti-Intellectualism (Paperback) 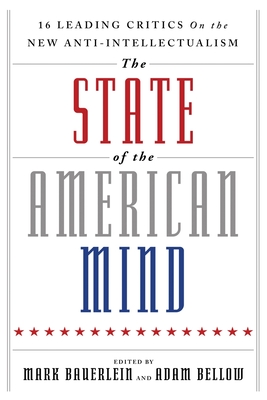 In 1987, Allan Bloom’s The Closing of the American Mind was published; a wildly popular book that drew attention to the shift in American culture away from the tenants that made America—and Americans—unique. Bloom focused on a breakdown in the American curriculum, but many sensed that the issue affected more than education. The very essence of what it meant to be an American was disappearing.

That was over twenty years ago. Since then, the United States has experienced unprecedented wealth, more youth enrolling in higher education than ever before, and technology advancements far beyond what many in the 1980s dreamed possible. And yet, the state of the American mind seems to have deteriorated further. Benjamin Franklin’s “self-made man” has become a man dependent on the state. Independence has turned into self-absorption. Liberty has been curtailed in the defense of multiculturalism.

In order to fully grasp the underpinnings of this shift away from the self-reliant, well-informed American, editors Mark Bauerlein and Adam Bellow have brought together a group of cultural and educational experts to discuss the root causes of the decline of the American mind.  The writers of these fifteen original essays include E. D. Hirsch, Nicholas Eberstadt, and Dennis Prager, as well as Daniel Dreisbach, Gerald Graff, Richard Arum, Robert Whitaker, David T. Z. Mindich, Maggie Jackson, Jean Twenge, Jonathan Kay, Ilya Somin, Steve Wasserman, Greg Lukianoff, and R. R. Reno. Their essays are compiled into three main categories:

Mark Bauerlein is an English professor at Emory University. His books include Literary Criticism: An Autopsy (University of Pennsylvania Press, 1997), Negrophobia: A Race Riot in Atlanta, 1906 (Encounter Books, 2001), The Dumbest Generation: How the Digital Age Stupefies Young Americans and Jeopardized Our Future (Tarcher, 2008) and The Digital Divide: Arguments for and Against Facebook, Google, Texting, and the Age of Social Networking (Tarcher, 2011). His essays have appeared in PMLA, Partisan Review, Wilson Quarterly, and Yale Review, and his commentaries and reviews have appeared in the Wall Street Journal, the Washington Post, the Weekly Standard, Reason magazine, and elsewhere.
Adam Bellow is vice president/executive editor at HarperCollins. He has also been an executive editor at Doubleday (Random House) and was formerly editorial director of The Free Press (Simon & Schuster). His essays and articles have appeared in numerous publications. He is also author of In Praise of Nepotism: A History of Family Enterprise from King David to George W. Bush (Anchor, 2004).

“Mark Bauerlein and Adam Bellow have edited a superb collection of essays on different aspects of American culture and life that extends, deepens, and updates Hofstadter’s critique of the naïve and feckless naturalism of John Dewey that now pervades and eviscerates our culture.” —M. D. Aeschliman, National Review Online

“In their new book titled The State of the American Mind, Mark Bauerlein and Adam Bellow, through a compendium of essays written by experts, have outlined using empirical detail and ironclad analysis what exactly has happened to the American mind and what the “new anti-intellectualism” has done to put it in such a pitiful state. What does this deconstruction of thought look like at a systematic level? The State of the American Mind, by providing a prismatic analysis of the dereliction of education, psychiatry and public discourse, gives the reader a roadmap to destruction and a trail of breadcrumbs back. . . . . The State of the American Mind, while far from being light enough to read on an airplane or at the beach, is a 2015 summertime must-read for any conservative who finds him or herself at odds with the state of public discourse in the United States. . . . . While we may be intellectually lazy, clouded, unmotivated and driven by unbridled emotion devoid of right reason, Bellow and Bauerlein provide thin spaces of light and hope. From start to finish, the carefully curated selection of experts keeps the reader engaged, informed and constantly stimulated. Finally, and most hopefully, among the flotsam and jetsam of a discarded intellectual tradition, one can discern what steps need to be taken to save us from destruction by our own hand…or perhaps by our own mindset.” —Nate Madden, Conservative Review

“This anthology will be a distressing but worthwhile read for those who believe traditional American values are endangered and must be preserved.” —Daniel Dreisbach, Publisher's Weekly

“The State of the American Mind, is a ‘must read,’ especially the chapter written by the political economist and Wall Street Journal columnist, Nicholas Eberstadt." —The Motley Monk

“Enhanced with the inclusion of an engaging Foreword (America: Are We Losing Our Mind?); an informative Introduction (The Knowledge Requirement: What Every American Needs to Know); and a concluding Afterword by the editorial team of Mark Bauerlein and Adam Bellow, The State of the American Mind: 16 Leading Critics on the New Anti-Intellectualism is an inherently fascinating read that is exceptionally well organized and presented throughout. Very highly recommended.” —Willis M. Buhle, Midwest Book Review