The American Dream Is Not Dead: (But Populism Could Kill It) (New Threats to Freedom Series) (Paperback) 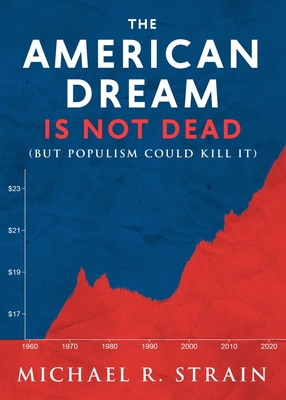 Populists on both sides of the political aisle routinely announce that the American Dream is dead. According to them, the game has been rigged by elites, workers can’t get ahead, wages have been stagnant for decades, and the middle class is dying.

Michael R. Strain, director of economic policy studies at the American Enterprise Institute, disputes this rhetoric as both wrong and dangerous. In this succinctly argued volume, he shows that, on measures of economic opportunity and quality of life, there has never been a better time to be alive in America. He backs his argument with overwhelming—and underreported—data to show how the facts favor realistic optimism.

He warns, however, that the false prophets of populism pose a serious danger to our current and future prosperity. Their policies would leave workers worse off. And their erroneous claim that the American Dream is dead could discourage people from taking advantage of real opportunities to better their lives. If enough people start to believe the Dream is dead, they could, in effect, kill it. To prevent this self-fulfilling prophecy, Strain’s book is urgent reading for anyone feeling the pull of the populists.

Michael R. Strain is Director of Economic Policy Studies and Arthur F. Burns Scholar in Political Economy at the American Enterprise Institute (AEI). An economist, his research has been published in academic and policy journals and he has edited two books on economics and public policy. He is a research fellow at the Institute of Labor Economics (IZA) in Bonn, Germany, writes regularly for popular audiences, and is a columnist for Bloomberg Opinion. Strain is frequently interviewed by major media outlets, speaks often to a variety of audiences, and has testified before Congress. He holds a PhD in economics from Cornell University and lives in Washington, DC.

"An inoculation against politically motivated misinformation."

"Strain sets a fine example in his short, approachable book. He shows that living standards have not stagnated in America. To the contrary, most prime-age workers today are better off than their parents were. There are real economic and social problems, which policymakers should address. But the economy is not rigged for all but those at the very top. One should hope his message is heard—and repeated—far and wide."

“[A] much-needed look at everything that’s going right in this country….People often fall into a belief that life was somehow better in the past. In The American Dream Is Not Dead, Michael Strain shows it wasn’t, while not denying that the U.S. faces real challenges even in our prosperous age. It’s a good gift for that pessimistic reactionary down the street.”

“Michael Strain offers a trenchant look at the material standard of living of U.S. households. If his message were summarized on a hat, it would read ‘Make America Grateful Again.’”

“Michael Strain’s important book is a welcome antidote to the pervasive pessimism surrounding economic policy debates.  I don’t agree on everything but feel better after reading it about our economy and more importantly about how policy can make it better.”

"Without glossing over the real challenges that too many Americans face, Michael Strain makes a persuasive case that the American dream remains alive and well. And, he provides important policy recommendations that policymakers would do well to heed in order to strengthen the American dream."

—Paul Ryan, former Speaker of the House of Representatives

“In this important book, Mike Strain persuasively bolsters his title claim that ‘the American Dream is not dead.’  While the nation faces disruptive challenges from economic changes from trade and technology, those very changes help propel our prosperity. What could kill the American Dream, as Strain notes, is a populist call for protection. Every serious student of the current economic and political situation should read this book.”

“Before you declare the American Dream is dead, you should take the time to read Michael Strain’s case to the contrary. Strain provides a thoughtful and balanced assessment of the evidence on the state of American workers and families, in the process rejecting some of the claims coming from both the left and the right.”

“Michael Strain is one of the keenest economists at work on the center-right today. In this brief but important book, he dares to bring facts to the overheated and often poorly informed debate over the state of the American Dream. Engaging and convincing, it is essential reading for anyone who wants to understand our economic present—and future.”

“In this lively contribution to our national debate, Michael Strain presents the evidence for how Americans are really doing. Strain shows we're faring better than you'd think from doom-sayers of left and right. He also argues that misunderstanding our real situation could lead to foolish and damaging policies that would make things worse, not better. An important short book.”

“This vital book suggests we reconsider the doom and gloom economic narrative, in favor of acknowledging that ongoing economic progress continues to deliver rising material prosperity each year, increasing opportunity, and greater freedom from want. The argument matters, because the strongest foundation for a "small c" conservative perspective is that a system that delivers such progress is worth conserving. Strain's intellectual depth, policy breadth, and relentless honesty mark him as one of the leading conservative intellectuals of our time. I'm no conservative, partly because I might see the case for change more clearly than Strain. But Strain asks hard questions, presents uncomfortable data, and makes counterarguments more clearly than any other right-of-center wonk. Whatever side of politics you're on, this smart little book will make you a better wonk, with a clearer sense about the facts that underpin the biggest policy debates of our time.”

"Just how good or bad are things in America right now? Michael Strain's The American Dream Is Not Dead is the most balanced and informative take on this question you are likely to see."

“The American Dream is alive and well—not based on wishful thinking, but on an abundance of evidence. Michael Strain’s balanced and expert presentation, acknowledging problems but identifying the strengths in America’s economy, is exactly what the policy debate has needed: a data-driven look at good news that has been ignored by politicians of left and right alike.”

“While I’m not convinced that the American Dream is entirely healthy, I’m more optimistic about its prospects after reading this book. I’m regularly on the other side of an argument from Michael Strain, yet I crave reading what he writes, because in it I’ll find more compelling reasoning than I’ll typically otherwise encounter. Michael’s willingness to engage constructively and convincingly makes him an important voice in any meaningful discussion about the American Dream.”

“Michael Strain's The American Dream Is Not Dead should be read widely by people who think—or fear—otherwise. In clear and simple style, this accessible, no-nonsense treatise lays out the basic facts about the track record of the American economy, and how the economy has delivered for ordinary Americans by such yardsticks as wage growth, middle class job creation, family income, and economic mobility. By these and other criteria, he argues, performance in recent decades has been tolerably good—certainly much better than many of us have been told.”

"We have a bad news bias. Frequently, however, that creates an inaccurate picture of the world. In The American Dream Is Not Dead, Michael Strain shows that while there are very real challenges ahead of us as a country, Americans are living in the best, most prosperous time in our nation’s history. This book shows that hope and truth go together."