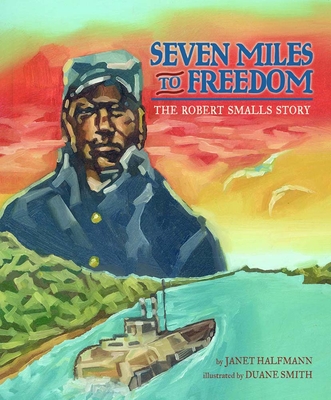 The true story of Robert Smalls, a slave steamboat wheelman who commandeered a Confederate ship during the Civil War and escaped with his family and crew to freedom.

Growing up a slave in South Carolina, Robert Smalls always dreamed of the moment freedom would be within his grasp. Now that moment was here.

Robert stood proudly at the Planter's wheel. Only seven miles of water lay between the ship and the chance of freedom in Union territory. With precision and amazing courage, he navigated past the Confederate forts in the harbor and steered the ship toward the safety of the Union fleet. Just one miscalculation would be deadly, but for Robert, his family, and his crewmates, the risk was worth taking.

Seven Miles to Freedom is the compelling account of the daring escape of Robert Smalls, a slave steamboat wheelman who became one of the Civil War's greatest heroes. His steadfast courage in the face of adversity is an inspiring model for all who attempt to overcome seemingly insurmountable challenges.

Janet Halfmann is the author of more than forty books for children, including Lee & Low's Midnight Teacher, which Kirkus called "An excellent homage to an African-American woman who taught ahead of her time" in a starred review. When she's not writing, Halfmann enjoys working in the garden, exploring nature, visiting new places, especially wildlife areas and living-history museums, and watching movies. Halfmann lives with her husband in South Milwaukee, Wisconsin. Duane Smith was an artist, illustrator, and graphic designer with a degree from Pratt Institute in New York City and a Master's in Illustration from the Fashion Institute of Technology. His wide-ranging works have been featured in periodicals, books, movie storyboards, and galleries. Smith also worked in graphic design and interactive media development, and split his time between homes in Brooklyn and Albany, New York. He died in 2020.


"Smith, a newcomer to picture books, sketches out scenes and characters with broad daubs of oil, creating a sculptural effect that heightens the monumental nature of Smalls’s deed. Page turns and textual pacing combine to relate the actual escape with pulse-pounding excitement; readers’ relief at Smalls’s success is almost physical. A triumph." - Kirkus Reviews, Starred Review


"Expressionistic illustrations accent the boldness and courage of this man who went on to become the first African-American pilot of a US vessel and was later elected to both the South Carolina and US legislatures." - Curriculum Connections, School Library Journal