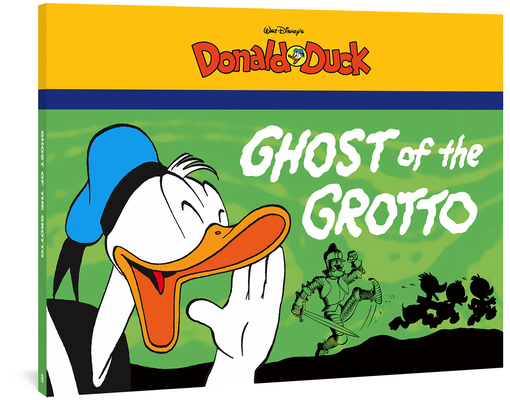 This world-famous Carl Barks/Donald Duck comics adventure has been repackaged to be more kid-friendly.

One of Donald Duck’s most famous adventures leads off our new line of affordable kid-sized Donald Duck books: just-right half-height books packed with fun, laughs, and adventure in every 96-page edition. Each story is complete with all the original story and art (no panels have been dropped or altered). In “Donald Duck and the Ghost of the Grotto,” Donald and his nephews try to harvest kelp at Skull-Eye Reef in the West Indies but are soon menaced by a ducknapping ghost in armor who is determined to carry out a centuries-old curse and a giant octopus who — well, what do you think giant octopuses do? Plus “Fireman Donald” and a second bonus story, all written and drawn by Disney Legend Carl Barks!

There’s plenty you may have to explain to your kids (or look up for yourself), like kelp harvesting, but the stories here are so engaging and the art so lively that you won’t get distracted by its dated qualities. Fantagraphics has smartly sized it down to fit easily into little hands, and there’s a fine mix of longer stories (like the title one) and shorter ones, should bedtime approach.
— Hillary Brown - Paste

If any work of popular entertainment of the 20th century could truly be called timeless, than Barks’ duck comics were. The highly imaginative and inventive, fact-packed, often humorous, rollicking-but-rarely-rowdy adventure stories have barely aged over the decades... Fantagraphics has done such an excellent job with The Carl Barks Library... [and this] is a pretty ideal companion format: Cheaper, more portable and more convenient, it offers an excellent introduction to some of the great stories of one of the greatest cartoonists.