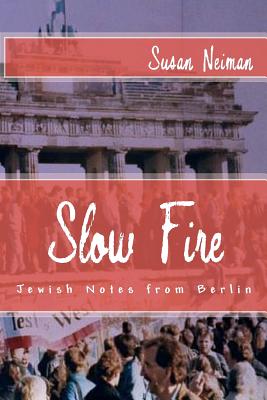 Berlin--"East" and "West," day and of course night--throughout the 80s before the Wall came down. In the eyes of an American philosophy student. And Jewish, which makes for moments at once awkward, poignant, resonant, unspoken, crass, funny, and always lurking. Most of all, Susan Neiman can write, as borne out again by her books to follow this debut. Here, we live the Reagan years with her--when a city was divided, America the occupier, and the cigarettes not named "Salem" because it sounds too Jewish. Peter Becker folded an easel in the corner to make a table. He brought cold cuts and bread and asked me what I thought of his paintings. Later I would learn that people here always ask you what you think of their paintings, and that it's wrong just to say you find them interesting, but perfectly alright to say you find them awful. . . . You come from a Jewish family, don't you?" asked Becker. "Yes," I said. "It doesn't matter," said the other painter. Doesn't matter? To whom?

Director of the Einstein Forum in Potsdam, Germany, and former professor of philosophy at Yale and Tel Aviv University. Her 2008 book "Moral Clarity" was named one of the year's Notable Books by the New York Times. She holds her Ph.D. in philosophy from Harvard.