Putting Wealth to Work: Philanthropy for Today or Investing for Tomorrow? (Hardcover) 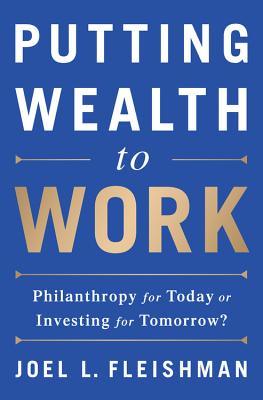 By 2025, Americans will likely be donating over half a trillion dollars annually to nonprofit organizations. Those philanthropic gifts will transform significant parts of America's civic sector landscape.

Philanthropy is entering an era of unprecedented growth and innovation. Established foundations such as Ford and Rockefeller are doubling down on programs tackling long-simmering problems, including global inequality, less-than-stellar education, and uneven access to health care. Many foundations are engaging in advocacy on controversial issues, exploring venture philanthropy solutions, and experimenting with impact investing. And philanthropists such as Bill Gates, Warren Buffett, New York's high-profile financiers, and Silicon Valley's billionaires are planning to put their wealth to work as never before: Mark Zuckerberg and Priscilla Chan recently pledged to donate 99 percent of their Facebook shares during their lifetimes, and nearly 150 others have signed the Giving Pledge to increase dramatically their "giving while living."

In Putting Wealth to Work, Joel L. Fleishman provides expert analysis of contemporary philanthropy, offering invaluable insight for those engaging with and affected by charitable foundations. This is the fascinating and definitive account of philanthropy today, and an indispensable guide to understanding its inner workings, impact, and expansive potential.

"Joel L. Fleishman has again shown why he is the
nation's preeminent scholar on the important subject of philanthropy."—David M. Rubenstein, CEO of the Carlyle Group

"This book not only praises traditional
perpetual foundations but examines in detail the limited-life or spend-down
models that inevitably mean the future philanthropic scene may well be very
different. [A] must-read for foundation boards and those giving or raising
billions for charitable causes."—Frank Bennack, executive vice chairman of Hearst

"Joel L. Fleishman, author of the leading book
on the American foundation, has written a stimulating sequel about contemporary
philanthropic practices, including the trend to spend down during the donor's
lifetime, that is wonderfully knowledgeable, wise, opinionated, and
argumentative."—Paul Brest, professor emeritus, Stanford LawSchool, and coauthor of Money Well Spent

"Targeted both to donors with a desire to
establish foundations and to development specialists, Fleishman's book also
offers useful tips for fund-seekers."—Kirkus Reviews

"Putting Wealth to Work reminds us why Joel L. Fleishman is America's preeminent scholar of philanthropy. By building on his extensive knowledge and practical experience as president of one of the nation's largest foundations, Fleishman challenges a growing trend among new donors against establishing perpetual institutions. . . . Putting Wealth to Work should be urgently downloaded to the reading apps of newly minted Silicon Valley billionaires, Wall Street titans, and captains of industry who aspire to carry on the legacy of Rockefeller, Carnegie, and Ford into a new century of giving."—Darren Walker, president ofthe Ford Foundation

"Given the author's vast knowledge of, and experience in, organized philanthropy, readers have much to gain from his insider survey of the field--the book is replete with personal observation and colorful opinion."—Philanthropy magazine

"The thoughtful, highly authoritative discussion,
supported by interviews with 50 leaders of prominent foundations, makes it a
key source for donors and for professionals and academics in this field."—Choice