Narconomics: How to Run a Drug Cartel (Paperback) 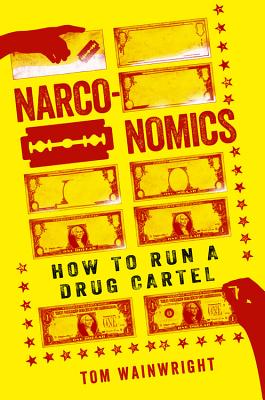 Tom Wainwright is the Britain editor of the Economist. Until 2013 he was the Mexico City bureau chief of the Economist, covering Mexico, Central America and the Caribbean, as well as parts of South America and the United States border region. He has been a commentator on the drugs business on CNN, the BBC and NPR, among others. He has a first-class degree in philosophy, politics, and economics from Oxford University. Wainwright lives in London, England.

“[Tom Wainwright] brings a fine and balanced analytical mind to some very good research…By looking at the drug trade as a business, Wainwright is able to reveal much about why it wreaks such havoc in Central and South America. Wainwright show[s] how drug violence is not so much senseless but the devastating result of economic calculations taken to their brutal extreme. [His] conclusion is titled 'Why Economists Make the Best Police Officers.' It is one of the pithiest and most persuasive arguments for drug law reform I have ever read.”—Misha Glenny, New York Times Sunday Book Review

"Tom Wainwright has powerfully argued in favor of legalizing drugs. He says that the policies aimed at stifling the drug trade seem to be misdirected and have failed... a controversial but well-argued book... a must-read for everyone interested in solving the drug issue. Wainwright makes a lot of sense at a time when the world seems helpless against drug traffickers."—The Washington Book Review

“[Wainwright's] book is courageous on several levels… [he] challenges everyone at once—the dealers, the drug czars, and the bystanders in between. A daring work of investigative journalism and a well-reasoned argument for smarter drug policies.”—Kirkus Reviews

“Readers interested in the intersection of crime, economics, entrepreneurship, and law enforcement will find this work fascinating.”—Library Journal

“A lively and engaging book, informed by both dogged reporting and gleanings from academic research...”—Wall Street Journal