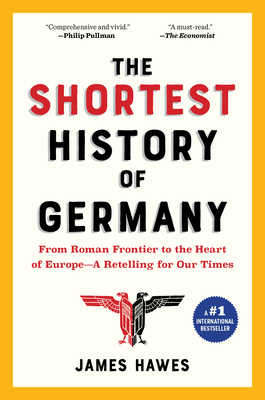 A highlight reel of the must-know moments across two millennia of world-changing history—from the Roman age to Charlemagne to von Bismarck to Merkel. The Shortest History books deliver thousands of years of history in one riveting, fast-paced read.

A country both admired and feared, Germany has been the epicenter of world events time and again: the Reformation, both World Wars, the fall of the Berlin Wall. It did not emerge as a modern nation until 1871—yet today, Germany is the world’s fourth-largest economy and a standard-bearer of liberal democracy.

“There’s no point studying the past unless it sheds some light on the present,” writes James Hawes in this brilliantly concise history that has already captivated hundreds of thousands of readers. “It is time, now more than ever, for us all to understand the real history of Germany.”

James Hawes studied German at University of Oxford and University College London, then held lectureships in German at the universities of Maynooth, Sheffield, and Swansea. He has published six novels with Jonathan Cape. Speak for England (2005) predicted Brexit; it has been adapted for the screen by Andrew Davies, though not yet filmed. His last book, Englanders and Huns, was shortlisted for the Political Books of the Year Awards in 2015. He leads the MA in creative writing at Oxford Brookes University.

“A fast-moving encapsulation of German history focusing on the thesis that Prussia’s aggression was a short-lived anomaly in the big picture and not reflective of the true German spirit . . . A marvelously concise effort, especially compelling as Angela Merkel is set to step down in 2021, leaving an uncertain vacuum in Europe.”—Kirkus Reviews

“In this ‘shortest history,’ Hawes conquers the dense task of recounting the story of the land and people of what is now Germany over the last two millennia . . . [He] does a good job guiding readers . . . pointing out parallels to today and arguing that Germany’s history, long-ago and recent, makes it a key, if not the key, player in world leadership.”—Booklist

“James Hawes condenses two millennia into a zippy 256 pages. Breezy yet knowledgeable, the book provides a thorough grounding in the major historical events and religious and regional differences that shaped the country at the very heart of Europe.”—Foreword Reviews

“With this pocket-size history, Hawes delivers a wide-ranging yet precise chronicle of political leaders who have served and shaped what is now Germany. . . . This clearly presented history will be of particular interest to readers following the political machinations of the European Union.”—Publishers Weekly

Praise from the UK

“An excellent little book . . . [Hawes] knows what he's on about and his conclusions are measured, but he favours clear, concise prose over dense academese. He has a sense of humour, and a sharp eye for similarities between then and now.”—The Spectator

“The Shortest History of Germany, a new, must-read book by the writer James Hawes, [recounts] how the so-called limes separating Roman Germany from non-Roman Germany has remained a formative distinction throughout the post-ancient history of the German people.”—Economist.com

“An excellent, elegantly written overview of German history from the Iron Age to Angela Merkel's chancellorship . . . Authoritative and accessible.”—New European (Book of the Week)

“A sparkling little book, which really does begin at the beginning . . . Hawes exemplifies the remarkable contribution of Anglo-Saxon scholarship to post-war German historiography . . . It is not accidental that some of the best minds in the Anglosphere have worried away at the German problem ever since 1945. The preceding generation had been dragged into two world wars, the Iron Curtain ran through Berlin, and getting to grips with German history was the key to preventing the Cold War from becoming a Third World War. Hawes has distilled all this into a primer that might be slipped into a prime ministerial red box.”—Standpoint

“Sweeping and confident . . . has a frightening urgency.”—Observer

“Engaging . . . I suspect I shall remember it for a lifetime.”—The Oldie

“Fascinating . . . as an introduction to the most important country in Europe today, this is a great read, and an ideal primer.”—Tribune Magazine

“Yes, the Nazis are here, but so too is a history stretching from the Germanic tribes who took on the Roman Empire, right up to Chancellor Angela Merkel . . . Comprehensive, vivid, and entertaining . . . if you want to understand a country on which much of the free world is now pinning its hopes, you could do worse than start here.”—Irish Examiner

“Here is Germany as you've never known it: a bold thesis; an authoritative sweep and an exhilarating read. Agree or disagree, this is a must for anyone interested in how Germany has come to be the way it is today.”—Professor Karen Leeder, Prof. of Modern German Literature, University of Oxford

“A daring attempt to remedy the ignorance of the centuries in little over 200 pages... not just an entertaining canter past the most prominent landmarks in German history—also a serious, well-researched and radical rethinking of the continuities in German political life.”—Professor Nicholas Boyle, Schröder Professor of German, Cambridge University

“Underwrite an overview of a complicated topic with one of these new short-and-sweet distillations. . . with maps, charts, sidebars, and illustrations to bring it alive.”—Mosaic, Morgan Stanley