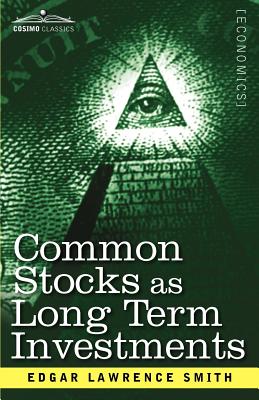 Originally published in 1924, Common Stocks as Long-Term Investments was the first book to promote the idea that stocks surpass bonds in long-term investments. The work, which was highly reviewed and praised, was a key component in the stock market boom of the 1920s. Author and banker Edgar Lawrence Smith was startled to discover, when writing a pamphlet touting the advantages of bonds, that stocks were a better form of long-term investment, yielding a higher return. The New York Times claimed that the book "laid down a principle which so reverses the accepted estimate of the relative investment value of bonds and common stocks as to have aroused the keen interest of Wall Street and investment bankers in general." This book will fascinate not only history buffs, but those interested in taking out stocks of their own. EDGAR LAWRENCE SMITH (1882-1971) was an American economist and financier, best known for his book Common Stocks as Long-Term Investments. After attending Harvard University, Smith worked in the finance industry until he became an adviser to the Low, Dixon & Co. brokerage firm. It was there he discovered, while trying to advertise the advantages of bonds in long-term investment, that stocks were actually a superior alternative, thus prompting his book. Its success enabled him to launch a mutual fund firm, Investment Managers Company, which he lost in the stock market crash of 1929.