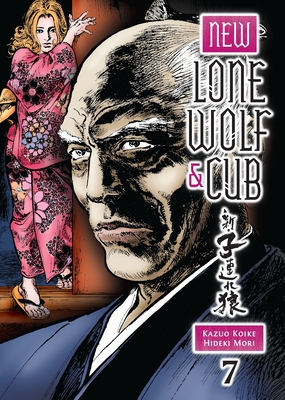 This is book number 7 in the Lone Wolf and Cub series.

With his ninja assassins exterminated by Togo Shigekata, Mamiya Rinzo plays his final card to stop the rogue swordsman's crusade for retribution: the ruthless Roshiya Ushidonki warriors Rinzo trained in Russia. But another foreign fighter has arrived in Japan--Rinzo's abandoned daughter, on her own quest for vengeance!

Kazuo Koike is a prolific Japanese manga writer, novelist and entrepreneur. Early in Koike's career, he studied under Golgo 13 creator Takao Saito and served as a writer on the series. Koike, along with artist Goseki Kojima, made the manga Kozure Okami (Lone Wolf and Cub), and Koike also contributed to the scripts for the 1970s film adaptations of the series, which starred famous Japanese actor Tomisaburo Wakayama. Koike and Kojima became known as the "Golden Duo" because of the success of Lone Wolf and Cub. Another series written by Koike, Crying Freeman, which was illustrated by Ryoichi Ikegami, was adapted into a 1995 live-action film by French director Christophe Gans.