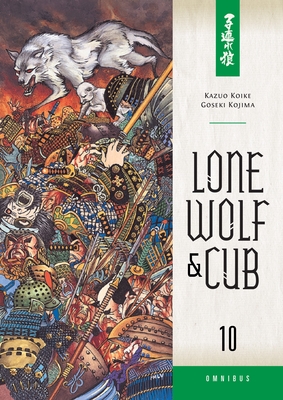 This is book number 10 in the Lone Wolf and Cub series.

Like leaves circling a maelstrom, Ogami Ittō and his mortal enemy, Yagyū Retsudō, are drawn inexorably by currents of vengeance toward their final confrontation. As torrential rains pound Edo, Yagyu's forces race to find Ittō before a boatload of explosives provides the Lone Wolf the means to destroy the Yagyu, once and for all!

Created by Kazuo Koike and Goseki Kojima, Lone Wolf and Cub has sold over a million copies of its first Dark Horse English-language editions, and this acclaimed masterpiece of graphic fiction is now available in larger format, value-priced editions.

Kazuo Koike is a prolific Japanese manga writer, novelist and entrepreneur. Early in Koike's career, he studied under Golgo 13 creator Takao Saito and served as a writer on the series. Koike, along with artist Goseki Kojima, made the manga, Lone Wolf and Cub, and Koike also contributed to the scripts for the 1970s film adaptations of the series, which starred famous Japanese actor Tomisaburo Wakayama. Koike and Kojima became known as the "Golden Duo" because of the success of Lone Wolf and Cub. Another series written by Koike, Crying Freeman, which was illustrated by Ryoichi Ikegami, was adapted into a 1995 live-action film by French director Christophe Gans. The author lives in Tokyo, Japan.