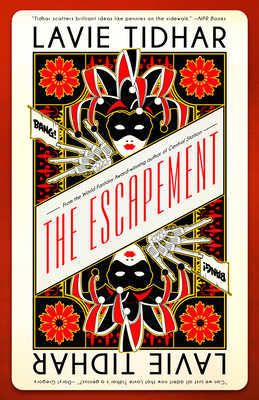 2022 Philip K. Dick Award Special Citation, Best Novel In this dazzling new novel evoking Westerns, surrealism, epic fantasy, mythology, and circus extravaganzas, World Fantasy Award winner Lavie Tidhar (Central Station) has created an incomparable dreamscape of dark comedy, heartbreak, hope, and adventure. Chronicling a lone man's quest in parallel worlds, The Escapement offers the archetypal darkness of Stephen King's The Gunslinger within the dark whimsy of a child's imagination. "Comic, tragic, and utterly magnificent."
--Samantha Shannon, author of The Priory of the Orange Tree "A wild, decadent hybrid of The Dark Tower and Carnivale."
--Catherynne M. Valente, author of Deathless Into the reality called the Escapement rides the Stranger, a lone gunman on a quest to rescue his son from a parallel world. But it is too easy to get lost on a shifting landscape full of dangerous versions of his son's most beloved things: cowboys gone lawless, giants made of stone, downtrodden clowns, ancient battles, symbol storms, and shadowy forces at play. But the flower the Stranger seeks still lies beyond the Mountains of Darkness. Time is running out, as he journeys deeper and deeper into the secret heart of an unforeseen world. In his most compelling work to date, Lavie Tidhar has delivered a multicolored tapestry of dazzling imagery. The Escapement is an epic, wildly original chronicle of the extraordinary lengths to which one will go for love.

Lavie Tidhar (A Man Lies Dreaming, Unholy Land) is an acclaimed author of literature, science fiction, fantasy, graphic novels, and middle grade fiction. Tidhar received the Campbell and Neukom Literary awards for his breakout novel Central Station, which has been translated into more than ten languages. He has also received the British Science Fiction, British Fantasy, and World Fantasy Awards. Tidhar's recent books include the Arthurian satire By Force Alone, and the series Adler. He is a book columnist for the Washington Post, and recently edited the Best of World SF anthology. Tidhar has lived all over the world, including Israel, Vanuatu, Laos, and South Africa, and he currently resides with his family in London.