Stumptown Vol. 4: The Case of a Cup of Joe (Hardcover) 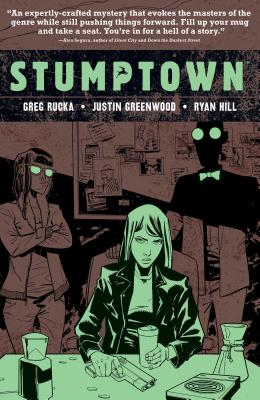 This is book number 4 in the Stumptown series.

Portland's best private investigator Dex Parios is back, and this time, the case is a real grind. When she picks up a simple assignment to escort a package of highly-prized coffee beans, Dex has no idea that she's stepping into the web of the Barista Mafia and eccentric billionaires with no compunction about using force to get the most coveted coffee around. And to top it all off, her sister is in town. Join Eisner Award-winner Greg Rucka and series artist Justin Greenwood (THE FUSE) for The Case of a Cup of Joe, the fourth case in the critically-acclaimed STUMPTOWN series. This oversized hardcover edition also collects a special silent issue, as well as extra material such as issue covers, process pieces, and creator interview.

JUSTIN GREENWOOD is an artist best known for his work on comic book series like Stumptown, Compass, The Old Guard, and Crone. As a freelance artist, he has worked with many companies including Image Comics, Oni Press, Dark Horse Comics, Ten Speed series Press/Penguin Random House, Sideshow Collectibles, Amazon, RadicalMedia, ABC Studios, and the Golden State Warriors. Greenwood was also an executive producer on the ABC television Stumptown, based on the Oni Press comic book. When not drawing, you can find him hanging with his wife and kids around the foothills of the Sierra Nevadas.