Egregores: The Occult Entities That Watch Over Human Destiny (Paperback) 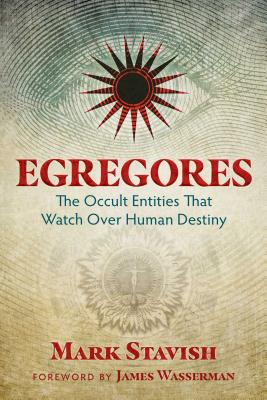 The first book to explore the history and influence of egregores, powerful autonomous psychic entities created by a collective group mind

• Examines the history of egregores from ancient times to present day, including their role in Western Mystery traditions and popular culture and media

• Provides instructions on how to identify egregores, free yourself from parasitic and destructive entities, and destroy an egregore, should the need arise

One of most important but little known concepts of Western occultism is that of the egregore, an autonomous psychic entity created by a collective group mind. An egregore is sustained by belief, ritual, and sacrifice and relies upon the devotion of a group of people, from a small coven to an entire nation, for its existence. An egregore that receives enough sustenance can take on a life of its own, becoming an independent deity with powers its believers can use to further their own spiritual advancement and material desires.

Presenting the first book devoted to the study of egregores, Mark Stavish examines the history of egregores from ancient times to present day, with detailed and documented examples, and explores how they are created, sustained, directed, and destroyed. He explains how egregores were well known in the classical period of ancient Greece and Rome, when they were consciously called into being to watch over city states. He explores the egregore concept as it was understood in various Western Mystery traditions, including the Corpus Hermeticum, and offers further examples from Tibetan Buddhism, Islam, modern esoteric orders such as the Order of the Golden Dawn and Rosicrucianism, the writings of H. P. Lovecraft and Kenneth Grant, and the followers of Julius Evola and Aleister Crowley. The author discusses how, even as the fundamental principles of the egregore were forgotten, egregores continue to be formed, sometimes by accident.

Stavish provides instructions on how to identify egregores, free yourself from a parasitic and destructive collective entity, and destroy an egregore, should the need arise. Revealing how egregores form the foundation of nearly all human interactions, the author shows how egregores have moved into popular culture and media--underscoring the importance of intense selectivity in the information we accept and the ways we perceive the world and our place in it.

Mark Stavish is a respected authority on Western spiritual traditions. The author of 26 books, published in 7 languages, including The Path of Alchemy and Kabbalah for Health and Wellness, he is the founder and director of the Institute for Hermetic Studies and the Louis Claude de St. Martin Fund. He has appeared on radio shows, television, and in major print media, including Coast to Coast AM, the History Channel, BBC, and the New York Times. The author of the blog VOXHERMES, he lives in Wyoming, Pennsylvania.

James Wasserman (1948-2020) was the author of several books, including The Templars and the Assassins, The Secrets of Masonic Washington, The Mystery Traditions, An Illustrated History of the Knights Templar, and The Temple of Solomon. A longtime student of the occult, the United States Constitution, and the writings of the Founding Fathers as well as a member of the Ordo Templi Orientis since 1976, he lived in New York City.

“Stavish gives not only theories but also facts and examples of these forces in spirituality, politics, news, and entertainment. More importantly, he explains how to recognize and free ourselves from their influences if we so choose.”
— George Noory, host of Coast to Coast AM

“Egregores: The Occult Entities That Watch Over Human Destiny marks a major turning point in popular esotericism, with Mark Stavish tackling head-on our society’s most pressing issue--the psychic and physical embodiment of ideologies and systems--with a penetrating and insightful text addressing the hidden life of thoughtforms as they emerge in our culture through mass movements, fundamentalist sects, corporate branding, and identity politics. Put down the fake news, pick up this book, and find out why Enoch warns us that the cosmic control system’s been put on divine probation!”
— David Metcalfe, editor in chief of Threshold

“It is a memorable day when the concept of the egregore enters one’s worldview. While these energy-complexes have been around as long as humanity, this is the first book to explain how they work and what to do about it. Mark Stavish’s clear writing and rich examples should convince any reader, whether schooled in esotericism or simply curious about their inner and outer world.”
— Joscelyn Godwin, author of Athanasius Kircher’s Theatre of the World

“Every now and then, there’s a book that can change the way you see the world. This remarkable little book about enthrallment and freedom is one. Read Egregores--you’ll look at society around you in new ways.”
— Arthur Versluis, author of The Secret History of Western Sexual Mysticism and Sacred Earth

“This encyclopedic account of group consciousness as an egregore, a being conceived to have arisen from the mutual psychic activity of serious initiates, traces the egregore idea throughout the history of Western esotericism and even into the practices of Tibetan Buddhism. Butler, Evola, Masters, Lovecraft, Machen, the AMORC and the OTO, and many other sources are quoted so as to give their opinions about the functions and dangers of egregores. It is unlikely that a more comprehensive book on the subject will ever be written.”
— Stevan Davies, Ph.D., author of Spirit Possession and the Origins of Christianity

“Suddenly there is a lot of talk about egregores, but what are they? Mark Stavish introduces some fascinating examples of these mysterious thoughtforms as they appear in different contexts from Tibetan Buddhism to the world of modern pop culture. Stavish’s book is an important foray into what is still almost virgin territory for researchers.”
— Christopher McIntosh, author of The Rosicrucians

“While the egregore is a concept with which most esoteric students are at least somewhat familiar, it is unlikely you would find a commonality of definitions among them. It is very appropriate for this vaguely understood concept to be the subject of a more in-depth study, and I can think of no better person to do this than Mark Stavish, whose background brings both authority and depth to such a review. The book provides a historical understanding of the origin of the term and its use through the ages, the various types that may exist in passive and active form, and an explanation of them through profound personal experience. This alone makes the book valuable. However, chapter 7 should be required reading for anyone contemplating joining an esoteric order--or any group with a common objective, for that matter. Stavish writes in a comfortable and informative style, and one comes to the end of the book with new information and much to think about. An excellent primer on egregores.”
— Piers A. Vaughan, author of Renaissance Man & Mason

"The idea of egregores could inspire paranoia in a certain kind of personality, and of course that is unwise. But it is no doubt a good idea to remember that false idols can take the form of thoughts and ideas as well as objects. Stavish's book is a timely, intelligent, and enjoyable reminder of this truth."
— Richard Smoley, Quest: Journal of the Theosophical Society in America

"The reaction has been one of the most positive I’ve ever had. Egregores really has struck a cord in the esoteric community."
— Aeon Byte, Gnostic Radio