Psychedelic Marine: A Transformational Journey from Afghanistan to the Amazon (Paperback) 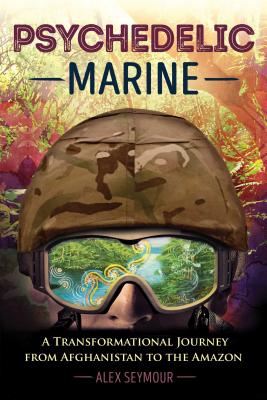 • Reveals how ayahuasca frees your consciousness from inherited beliefs, fears, and traumatic experience, allowing healing from PTSD, enabling genuine growth, and offering an enlightening path out of the malaise, discontent, and dissatisfaction that life in a modern world often brings

• Details the author’s experiences in Afghanistan, sailing on the Amazon river with a shaman, and the many ayahuasca ceremonies he experienced in the jungle

After returning from a tour of duty during the war in Afghanistan, Alex Seymour needed a way to cope with the extremes he experienced as a member of the Royal Marine Commandos, losing 7 men in his unit, and having his best friend critically injured by a Taliban bomb. Drawing upon his pre-deployment experiences, Alex knew that entheogens could help him release his fears and traumas. But he also knew that simply taking psychedelics wasn’t enough--he needed ceremony, something sacred to draw meaning from his experiences, to help him reassess not only the war and his role in it, but his entire life. So he set out for the Amazon in search of the hallucinogenic brew known as ayahuasca and a shaman to guide him. The result is a crazy, page-turning adventure where he journeys deep into the jungle and himself.

Alex soon finds himself deep within the jungle on an incredible adventure, sailing on the Amazon river with an ayahuasca shaman and his troop of 8 female shamanas, whose ethereal songs help guide participants during the nightly ayahuasca ceremonies. Accompanied by others seeking wisdom and a redemptive experience from their First World professional lives, Alex finds his core beliefs fundamentally challenged, replaced by the power of direct experience of the sacred, which allows him to release his fears from the war and set an inspiring path for the future.

Painting a vivid portrait of both the anguish of war and the transcendent world of shamanic ritual, the author shows how young people often enlist in the military to satisfy our human need for a rite of passage into adulthood, a ritual sorely missing in our culture. He explores how ayahuasca can offer a way to help soldiers prepare for war and help combat veterans heal from war and overcome PTSD--as well as alcoholism and addiction. From Afghanistan to the Amazon, the author shows how ayahuasca frees your consciousness from inherited beliefs and fears, offering a truly transformative rite of passage.

Alex Seymour enlisted in the Royal Marines Commandos as a teenager, serving for 6 years and completing 2 tours of duty on active service. Twenty years later he returned to the service as the oldest front line commando in Helmand Province in Afghanistan. He is currently the Technology Account Director for a global technology company and lives with his wife and children in Buckinghamshire, England.

“Little by little, one step at a time, one person at a time, but very effectively, the Amazonian visionary brew ayahuasca is changing human consciousness precisely where such changes are most urgently needed--in the very heartland of Western technological, industrial, and military power. Psychedelic Marine is a truly original and authentic account of the transformations that this ancient and sacred medicine can set in process.”
— Graham Hancock, author of Fingerprints of the Gods

“Hands down the most accurate depiction of what it’s like both as a combat veteran and a psychedelic warrior. The worlds appear to be vastly different, but Alex was able to bridge the connection. I highly recommend this book to anyone who is interested in either world.”
— Cpl Ryan LeCompte, former USMC 0311 infantryman, founder of Veterans for Entheogenic Therapy

“. . . a rare book that both acknowledges the transformative power of war with its confrontation with death and the transformative power of psychedelics, with the confrontation with ego death. Sometimes it takes more courage to face one’s inner world than to face enemies in the outer world. I read this book cover to cover and recommend others do so as well.”
— Rick Doblin, executive director of MAPS

“A raw, honest, and powerful account of a marine and a profound healing, this book stands out for its account of personal transformation of a military man into a self-governing individuator, surrendering to nothing but the sacred source within his own heart. Highly recommended reading!”
— C. Michael Smith, Ph.D, clinical psychologist, medical anthropologist, author of Jung and Shamanism

“Alex Seymour deployed to Afghanistan to test himself and rediscover his full potential through warfare. Little did he know it was a stepping stone to his hardest test as a warrior--taking ayahuasca in the jungle in Peru where he would surrender to his greatest fears and find that the ultimate answers had been inside himself all along.”
— Ian Benouis, West Point graduate, former Black Hawk helicopter pilot and combat veteran, and cannabi

“A revealing juxtaposition of two life experiences most can only begin to imagine, bringing to life the stress and fatigue of a marine’s lot in Afghanistan and his subsequent metaphysical quest for enlightenment.”
— Jake Wood, author of Among You: The Extraordinary True Story of a Soldier Broken by War

“More than a report of one marine’s experience, this book is a call to the armed forces medical corps, the Veterans Administration, and veterans’ groups . . . to fund research to support treating PTSD with ayahuasca and other psychedelics.”
— Thomas B. Roberts, Ph.D., author of The Psychedelic Future of the Mind

“A true story of a man who pushed the boundaries way beyond any semblance of comfort zone through the devastation and horror of war and who went on to find healing, transformation, and salvation by dissolving the boundaries of ordinary consciousness into the vast spaces of the transpersonal realm.”
— Tom Soloway Pinkson, Ph.D., vision quest leader, psychologist, and author of The Shamanic Wisdom of

“Psychedelic Marine is a unique, mind-stretching, powerful story that captivates you from page one to the end. If you want your spirit to be lifted and inspired and to know what is possible beyond the boundaries of convention, this is a must-read.”
— Chris Walton, MSc, best-selling author of The Gamma Mindset

". . . the work does offer an interesting firsthand account of encounters far removed from many readers' calm and orderly lives."
— Publishers Weekly, July 2016

After six years in the Royal Marines Commandos from the age of 17, and then 20 years in the corporate world, Alex Seymour rejoined the military and returned to the front line. He was posted to Afghanistan, in Helmand Province, and the enemy was the Taliban. Already a husband and a father of two, Seymour wanted to explore what it meant to be a "good man". His tales of his tour of duty make for some hair-raising reading. But Seymour had another quest: to explore transcendent worlds.
Before he signed up again with the military, Seymour experimented with psilocybin mushrooms and DMT; the awesomeness revealed to him meant that his life would never be the same again. He no longer feared death, as he came to realise that consciousness survives it. After his service, Seymour sought to take the entheogen adventure further and travelled to the Amazon to join a shaman in ceremonies centred around the hallucinogenic ayahuasca brew. In the company of other seekers, he again had direct perception of the sacred, and his experiences helped him recover from the war and set a path for the future. In his view, the ayahuasca ritual has the potential to prepare soldiers for war and to heal from it. It can offer a meaningful rite of passage for young military recruits and assist veterans overcome PTSD as well as alcohol and drug issues. Seymour's story of transformation has profound implications.
— Nexus