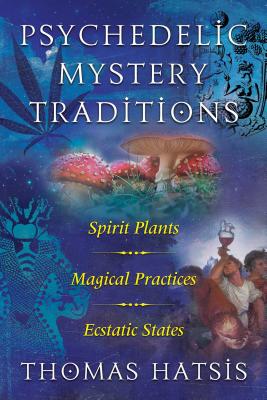 • Explores the use of psychedelics and entheogens from Neolithic times through Antiquity, the Middle Ages, and the Renaissance to the Victorian era and beyond

• Reveals how psychedelics were integrated into pagan and Christian magical practices and demonstrates how one might employ a psychedelic agent for divination, sex magic, alchemy, communication with gods, and more

• Examines the role of entheogens in the Mysteries of Eleusis in Greece, the worship of Isis in Egypt, the Dionysian mysteries, and the magical practices of the Thessalian witches as well as Jewish, Roman, and Gnostic traditions

Unbeknownst--or unacknowledged--by many, there is a long tradition of psychedelic magic and religion in Western civilization. As Thomas Hatsis reveals, the discovery of the power of psychedelics and entheogens can be traced to the very first prehistoric expressions of human creativity, with a continuing lineage of psychedelic mystery traditions from antiquity through the Renaissance to the Victorian era and beyond.

Describing how, when, and why different peoples in the Western world utilized sacred psychedelic plants, Hatsis examines the full range of magical and spiritual practices that include the ingestion of substances to achieve altered states. He discusses how psychedelics facilitated divinatory dream states for our ancient Neolithic ancestors and helped them find shamanic portals to the spirit world. Exploring the mystery religions that adopted psychedelics into their occult rites, he examines the role of entheogens in the Mysteries of Eleusis in Greece, the worship of Isis in Egypt, and the psychedelic wines and spirits that accompanied the Dionysian mysteries. The author investigates the magical mystery traditions of the Thessalian witches as well as Jewish, Roman, and Gnostic traditions. He reveals how psychedelics were integrated into pagan and Christian magical practices and demonstrates how one might employ a psychedelic agent for divination, magic, alchemy, or god and goddess invocation. He explores the use of psychedelics by Middle Eastern and medieval magicians and looks at the magical use of cannabis and opium from the Crusaders to Aleister Crowley.

From ancient priestesses and Christian gnostics, to alchemists, wise-women, and Victorian magicians, Hatsis shows how psychedelic practices have been an integral part of the human experience since Neolithic times.

Thomas Hatsis is a historian of psychedelia, witchcraft, magic, pagan religions, alternative Christianities, and the cultural intersection of those areas, who holds a master’s degree in history from Queens College. The author of The Witches’ Ointment and Psychedelic Mystery Traditions, he runs psychedelichistorian.com, a site dedicated to promoting the latest and best information pertaining to the Psychedelic Renaissance. He lives in Portland, Oregon.

Stephen Gray is a teacher and writer on spiritual subjects and sacramental medicines. He has worked extensively with Tibetan Buddhism, the Native American Church, and with entheogenic medicines. The author of Returning to Sacred World: A Spiritual Toolkit for the Emerging Reality, he is also a conference and workshop organizer, leader, and speaker as well as a part-time photographer and music composer under the artist name Keary. He lives in Vancouver, British Columbia.

“Thomas Hatsis leads us on a fascinating journey into the spiritual magic of elixirs--into the realm of the gods, daemons, witches, and mystery schools. This rigorously researched book is for magicians, adepts, and devotees of psychedelic magic.”
— Margaret De Wys, author of Black Smoke and Ecstatic Healing