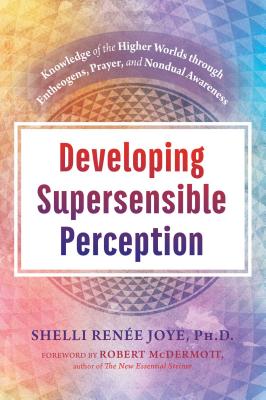 A detailed guide to awakening your powers of supersensory perception

• Explores acquisition of these powers at birth (genetic) and through entheogens, mantra and prayer, effort and exercise, and nondual meditation

According to philosopher Rudolf Steiner (1861-1925), there exists within every human being the potential for developing supersensory powers and, with these powers activated, the ability to awaken the higher self and attain knowledge of non-physical higher worlds. Steiner himself worked diligently throughout his life to develop his faculties of “supersensible perception” and, scattered throughout his many works, he describes methods by which to activate and operate these supersensory-cognitive systems.

Distilling techniques from Steiner’s more than 400 published volumes, Shelli Renée Joye, Ph.D., presents a practical, modern approach to acquiring, cultivating, and maintaining supersensible perception and developing higher consciousness. The five approaches she studies include acquisition by birth (genetic), entheogens, mantra and prayer, effort and exercise, and Samadhi--equated by many with nondual awareness. Adding another dimension to Steiner’s methods, the author shows how these steps are powerfully aligned with 4th-century South Indian sage Patañjali’s teachings in the Yoga Sutra.

The author explores how to develop what you have acquired through imaginative, active, or intuitive thinking, as well as how to learn through inner guidance and how to transform knowledge gained from books into spiritual advancement. She also shares her own extraordinary experiences of supersensory networks of consciousness.

Connecting Steiner’s ideas to modern advances in quantum physics, psychedelic science, and consciousness studies, Dr. Joye shows how each of us is capable of developing supersensible perception and expanding our awareness to connect with cosmic consciousness.

Shelli Renée Joye, Ph.D., attended Rice University on a physics scholarship and graduated with a degree in Electrical Engineering. After graduation, she worked with John Lilly on interspecies communication and pursued contemplative practice with Chögyam Trungpa Rinpoche. She completed her doctorate in Philosophy, Cosmology, and Consciousness at the California Institute of Integral Studies. The author of several books, including Tuning the Mind, she lives in Viola, California.

“. . . a clearly written comparison of Western (Steiner) and Eastern (Patañjali) approaches to developing ‘supersensory powers,’ an ability said to allow one to perceive domains far beyond the ordinary, including the esoteric realms called the astral and the etheric. Shelli Joye shows that surprisingly these two mystics were describing the same underlying methods. But what is unique about this book is the appendix in which Joye applies modern scientific concepts to help explain what ‘supersensory’ might mean. An intriguing work, well worth reading.”
— Dean Radin, Ph.D., chief scientist at the Institute of Noetic Sciences (IONS) and author of Real Mag

“If we are indeed nonlocal beings with dormant unrealized potentials, then we all have the ability to be extraordinary. Read Developing Supersensible Perception to learn more.”
— Deepak Chopra, M.D., author of Buddha: A Story of Enlightenment and coauthor of You Are the Universe

“Joye gives us the gift of a rare and remarkably clear explanation of Rudolf Steiner’s thoughts on higher worlds of consciousness. To this she brings her own experience as both a physicist and philosopher to yield a thoroughly contemporary understanding of Steiner’s insights.”
— Allan Combs, Ph.D., director of the Center for Consciousness Studies at the California Institute of

“. . . a remarkable account of consciousness as developed by two great beings, Steiner (representing Western ideas) and Patañjali (representing Eastern ideas). Joye’s writing, approach, and the depth of presentation leave the reader with a sense of connection that one would not have guessed existed. It is indeed possible, as Joye has demonstrated, to approach the supersensory--in fact the entire human mystical experience--in an expanded scientific way.”
— Menas C. Kafatos, Ph.D., coauthor of You Are the Universe and The Conscious Universe

“Shelli Joye inspires us to awaken into deepest truth, where we can travel beyond everyday states of awareness to explore and develop supersensory perception. As ‘psychonauts’ we can learn to think actively, touching the very foundation of reality and ultimately giving birth to our highest, noblest selves. Highly recommend!”
— Cynthia Sue Larson, MBA, D.D., founder of RealityShifters and author of Quantum Jumps

“. . . a tour through the realms of consciousness that few could present. This book shows both detailed science and a refined humanities examination in service of painting the most precise and detailed picture of the deeper realms of reality.”
— James D. Ryan, Ph.D., professor emeritus of Asian philosophies and cultures at the California Instit

“What do you get when you mix degrees in electronics and mathematical engineering and a Ph.D. focused on philosophy, cosmology, and consciousness with Rudolf Steiner’s theosophy, Patañjali’s yoga, and psychedelic drugs? Hold on to your holographic hats, psychonauts, Shelli Joye will be your captain to the bubbling multiverse at the Planck length of space-time. Just be sure to bring your Fourier transform along so you can rematerialize in the explicate order when the trip is done.”
— Timothy Desmond, Ph.D., author of Psyche and Singularity

“This is not a book for the closed-minded! Shelli Joye’s creative weaving of Steiner’s insights--with threads drawn from yoga philosophy, quantum physics, electrical engineering, psychedelics, and alien encounters--is an invitation to walk, or dance, on the wild side of psychospiritual speculation.”
— Sean Kelly, Ph.D., author of Coming Home: The Birth and Transformation of the Planetary Era

“Shelli Joye takes the reader on a journey through the evolution of consciousness as described by Steiner, right to the frontier of sense-free thinking. She guides us with love, insight, and consummate intelligence into the heart of the mystery. An extraordinary book that achieves the seemingly impossible by articulating that which lies beyond the thinking mind.”
— Stephen Julich, Ph.D., program manager of the East-West Psychology Department at the California Inst

“. . . a wonderful synthesis of science and spirituality. The ideas in this book are challenging and elusive. The math is daunting. But it’s burgeoning with understanding and insight. If you want to grapple with the “hard problem,” here’s a great place to start. And it might even help you develop a bit of perception beyond the ordinary. It’s inspired me to pursue Rudolf Steiner’s recommendations.”
— Toby Johnson, Ph.D., author of Finding Your Own True Myth

“Shelli Joye has done something important in bringing the early twentieth-century theosophy of Rudolf Steiner together with early twenty-first-century science. The reader will find in the first half of the book an insightful review of the theosophy of the past century illuminated both by the author’s careful research and by her personal experience with the supersensible. In the second half, the author explains the challenging new neurophysics, which offers the scientific grounding that theosophy has up to now lacked. For readers not only in circles that are attuned to theosophy but also with those who sense a disassociation of doctrine and reality in their traditions.”
— Rev. Michael J. Tan Creti, author of The Great Crowd

“Joye’s vivid, storied prose jaunts through the hinterlands of consciousness, offering a lucid interweaving of Steiner and Patañjali’s technologies for navigating states of consciousness, traversing the subtle and manifest realms and their associated temporalities. Joye pays particular attention to physical and mathematical correlates of consciousness, including the role of the Fourier transform in translating between the temporal and atemporal--Bohm’s explicate and implicate orders. Her keen intuition for seeing and explaining how things fit together reveals exactly the type of mind we need to lead us into the now burgeoning integral era.”
— Kerri Welch, Ph.D., philosopher of time, mind, and physics