Bottoming Out the Universe: Why There Is Something Rather than Nothing (Paperback) 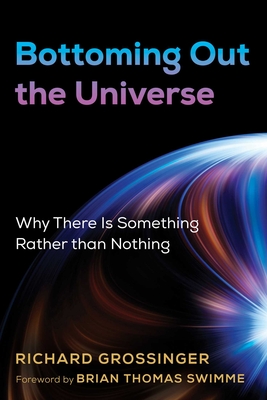 An exploration into consciousness, the universe, and the nature of reality

Scientific orthodoxy views the universe as conceived of matter--protons, neutrons, electrons, down to the smallest particle, quarks. But, when you keep digging, what is “beneath” quarks? The scientific worldview does not take into account consciousness or life itself. How did consciousness become part of the material universe? Is it a by-product of brain chemistry or a constituent of reality? Or, to dig deeper, which is more fundamental: the existence of an objective physical universe or our subjective experience of it?

In this investigation into consciousness, the universe, and the nature of reality, Richard Grossinger offers a wide-ranging foundation for reimagining the universe as based in consciousness rather than matter. He presents in-depth analysis of the standard scientific description of the universe, revealing the holes in its theories. Exploring the interpenetration of matter and all reality by consciousness, the author looks at reincarnation and past-life memories, examining famous and lesser-known but verifiable accounts. He then explores the nature and origin of consciousness, with accompanying explorations of animal consciousness, the brain as a computer, multiple identities, thoughtforms, soul pictures, and paranormal phenomena like UFOs, faeries, and poltergeists. He also examines concepts from physics that combine elements of both consciousness and matter, such as collapsing waveforms and the uncertainty principle of quantum mechanics.

Examining nonlocal and transpersonal modes of consciousness, Grossinger looks at the difference between consciousness and personal identity. He expands this discussion with reflections on Sethian cosmology, using Seth’s own words and Jane Roberts’s and John Friedlander’s interpretations. He reveals that consciousness also encompasses what has yet to manifest and explains why the universe exists at all: why there is “something” rather than “nothing.” Skewering the materialist paradigm and placing consciousness alongside mass, gravity, and heat as an essential component of the universe, Grossinger proposes that reality is a thoughtform where sentient beings collaborate to bring about a concrete realm vibrating at their own frequency.

Richard Grossinger is the curator of Sacred Planet Books, a member of the Inner Traditions editorial board, the founder and former publisher of North Atlantic Books, and a founding copublisher of Io, a seminal interdisciplinary literary journal that ran from 1964–1993. He attended Amherst College and completed a PhD in ecological anthropology at the University of Michigan. He has written more than 30 widely acclaimed books on alternative medicine, cosmology, embryology, and consciousness, including Dark Pool of Light: Reality and Consciousness, The Night Sky: Soul and Cosmos, and Bottoming Out the Universe.

Brian Swimme, Ph.D., a specialist in mathematical cosmology, was educated at Santa Clara University and the University of Oregon. At the present time, he is the director of the Center for the Story of the Universe, a research affiliate of the California Institute of Integral Studies, in San Francisco.

“In this profound but accessible book, Richard asks timeless questions like, ‘Who am I?’ ‘What is reality?’ and ‘What is consciousness?’ In an era of distraction and despair, he returns our attention to what deeply matters and explores, with clarity and nuance, the hidden meaning of life.”
— Connie Zweig, Ph.D., coeditor of Meeting the Shadow and coauthor of Romancing the Shadow

“Richard Grossinger is uniquely qualified to set our feet upon a righteous path--not around the problem, as so many do, but straight into its convoluted tangle. Is consciousness an illusion or a fundamental property of nature? Addressing this question has occupied many minds, and Richard’s foray here will engage yours to take you deeper into your own sense of being. If you are a scientist, here you must confront the limitations of science to explain your life. For the spiritualists, Richard’s erudition will rub your nose in the hard realities of the physical universe. Puzzle and wonder as you scratch beneath the surface with Richard as your able guide.”
— Thomas W. Myers, author of Anatomy Trains

“Richard Grossinger is one of the most articulate spokesmen of our time. He has the unique ability to move adeptly from one field to another, not superficially but deepening our understanding of how these fields interweave. I was especially drawn in by his thoughtful chapter on trauma . . . truly an engaging addition to the field. In his study of energy patterns, complexity, psychic phenomena, and consciousness, Grossinger takes us on an engaging journey. It may not be an easy read, but it is a rich one.”
— Peter A Levine, Ph.D., author of Waking the Tiger, Healing Trauma, and In an Unspoken Voice

“Bottoming Out the Universe is an amazing literary task. It will help people who are never going to quiet their minds and see the nature of things to understand ‘bottoming out’ as best as possible conceptually. What Richard does is about as far as one can go with concept, in my opinion.”
— Paul Pitchford, dharma teacher and author of Healing with Whole Foods

“In Bottoming Out the Universe, Richard Grossinger puts the proverbial capstone on a life’s work of intense inquiry and observation. He’s like a Neolithic shaman, and what emerges are numinous gifts cloaked in a magical language. Indeed, this magnum opus is like an epic incantation and not just a recital of data points, random ephemera, and formulaic synthesis. The universe bottoms out, and there is no point of return, only a chthonic journey through memory, fear, doubt, and a hard-earned hope that what awaits on the other side is not just an astral projection of this world, without its governors and filters, but something that’s far beyond even Grossinger’s skills of syntactic mediumship to transmit. Dig in, put your feet up, and enjoy the ride.”
— Robert Phoenix, curator of Astrology for the Now Age website

“Bottoming Out the Universe encompasses so many aspects of what it means to explore silence and movement, and how these frequencies vibrate and become a dance. When I enter a room to begin a new work, I enter with ALL the questions implied in this book--they hang in the air! And as I choreograph, the ‘physical plane of ambient reality’ of which Richard speaks is always there. Reading this book is like making a work of art. You start one place and end up another.”
— Margaret Jenkins, founder and artistic director of the Margaret Jenkins Dance Company

“Reading Grossinger turns cosmology and science into poetry. He provides the track lighting for a quirky map into the secret corridors of creation that we never dared to explore. The graffiti of the ages is scratched on its walls.”
— Paul Weiss, author of Moonlight Leaning Against an Old Rail Fence: Approaching the Dharma as Poetry

“We offer you greetings, Richard Grossinger. We are contacting you because we have observed your efforts over the decades in your capacity as explorer of the arcane. We note that you have spent decades attempting to understand the connection between the spiritual and the physical. Your encyclopedic efforts are exemplary in their thoroughness as well as their breadth and depth. We also note that often you have felt somewhat like a prophet crying in the wilderness. Be assured your writings are noticed. In future years, after your death, your prolific work will find an eager and stimulated readership. Your work has the potential to change lives and will eventually rank among this category of literature.”
— Channeled by Keith Hill, author of Experimental Spirituality

"Richard Grossinger's great gift is his ability to explicitly state what many of us merely feel. This is a magnificent talent, and also a rare blessing for humanity...I stand in awe of Bottoming Out the Universe. It is a rare accomplishment, and never more needed than in our perilous times."
— Larry Dossey, MD, author of One Mind

"In this investigation into consciousness, the universe and the nature of reality, Richard Grossinger offers a wide-ranging foundation for reimagining the universe as based in consciousness rather than matter. He presents in-depth analysis of the standard scientific description of the universe, revealing the holes in its theories."
— Anne Lewis, Metaphysical Guide to Tucson