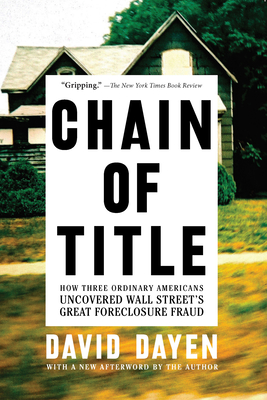 NOW IN PAPERBACK The gripping (New York Times) and Hitchcockian(Publishers Weekly) story of how a nurse, a car dealership worker, and a forensic expert took on the nation's largest banks
A Kirkus Reviews and The Week best book of the year, David Dayen's Chain of Title is a riveting work that recalls A Civil Action, Erin Brockovich, and Flash Boys, recounting how three ordinary Floridians--a car dealership worker, a cancer nurse, and an insurance fraud specialist--helped uncover the largest consumer crime in American history, challenged the most powerful institutions in America, and--for a brief moment--brought the corrupt financial industry to its knees. Lisa Epstein, Michael Redman, and Lynn Szymoniak did not work in government or law enforcement. They had no history of anticorporate activism. Instead they were all foreclosure victims, and while struggling with their shame and isolation they committed a revolutionary act: closely reading their mortgage documents, discovering the deceit behind them, and building a movement to expose it. Harnessing the power of the Internet, they revealed how the financial crisis and subsequent recession were fundamentally based upon a series of frauds that kicked millions out of their homes because of false evidence by mortgage companies that had no legal right to foreclose. As Rolling Stone's Matt Taibbi noted: Chain of Title is a sweeping work of investigative journalism that traces the arc of a criminally underreported story in America, the collapse of the rule of law in the home mortgage industry.

David Dayen is a contributing writer to Salon and The Intercept and a weekly columnist for the New Republic and the Fiscal Times. Other outlets that publish his work include Vice, The Nation, the American Prospect, Naked Capitalism, and In These Times. He lives in Los Angeles.