The Great Money Bubble: Protect Yourself from the Coming Inflation Storm (Hardcover) 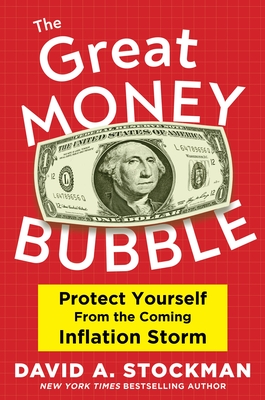 Americans are facing sticker shock at every turn: from the gas pump to the grocery store and every kind of consumer service. But the eye-popping price increases are just the tip of the iceberg in terms of the threat to the country's economic recovery. Inflation showers windfalls on the rich while penalizing workers, savers, retirees, small businesses, and most of Main Street economic life.

New York Times bestselling author and former investment manager David A. Stockman, who served as director of the Office of Management and Budget under President Reagan, explains the roots of today's runaway inflation so investors at all levels can calibrate their financial strategies to survive and thrive despite economic uncertainty.

The Great Money Bubble covers the entire economic landscape, including:

After spearheading the economic policy for the Reagan Revolution, Stockman worked on Wall Street at the highest levels, and is now an adviser to professional investors. With this book, readers at all investment levels can have access to his groundbreaking financial advice.

DAVID A. STOCKMAN (MIAMI, FLORIDA) is the ultimate Washington insider turned iconoclast. He began his career in Washington as a young man and quickly rose through the ranks of the Republican Party to become the Director of the Office of Management and Budget under President Ronald Reagan. After leaving the White House, Stockman had a 20-year career on Wall Street.Stockman's career in Washington began in 1970, when he served as a special assistant to U.S. Representative, John Anderson of Illinois. From 1972 to 1975, he was executive director of the U.S. House of Representatives Republican Conference. Stockman was elected as a Michigan Congressman in 1976 and held the position until his resignation in January 1981. He then became Director of the Office of Management and Budget under President Ronald Reagan, serving from 1981 until August 1985. Stockman was the youngest cabinet member in the 20th century. Although only in his early 30s, Stockman became well known to the public during this time concerning the role of the federal government in American society.After leaving government, Stockman joined Wall Street investment bank Salomon Bros. He later became one of the original partners at New York-based private equity firm, The Blackstone Group. Stockman left Blackstone in 1999 to start his own private equity fund based in Greenwich, Connecticut.Stockman is the author of numerous New York Times bestselling books and also provides private research and analysis to professional investors and firms globally through "David Stockman's Contra Corner," his subscriber advisory relating to investing, global economics, and public policy.Stockman was born in Ft. Hood, Texas. He received his B.A. from Michigan State University and pursued graduate studies at Harvard Divinity School. He lives with his wife Jennifer Blei Stockman, and they have two daughters, Rachel and Victoria.The author lives & works in the Miami, Florida metro area.www.davidstockmanscontracorner.com