The Millionaire Next Door: The Surprising Secrets of America's Wealthy (Hardcover) 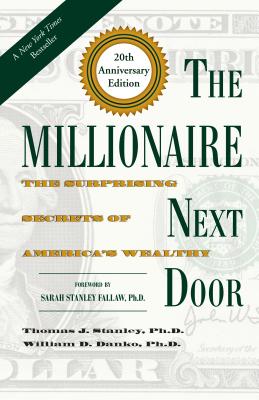 "Why aren't I as wealthy as I should be?" Many people ask this question of themselves all the time. Often they are hard-working, well educated middle- to high-income people. Why, then, are so few affluent. For nearly two decades the answer has been found in the bestselling The Millionaire Next Door: The Surprising Secrets of America's Wealthy, reissued with a new foreword for the twenty-first century. According to the authors, most people have it all wrong about how you become wealthy in America. Wealth in America is more often the result of hard work, diligent savings, and living below your means than it is about inheritance, advance degrees, and even intelligence. The Millionaire Next Door identifies seven common traits that show up again and again among those who have accumulated wealth. You will learn, for example, that millionaires bargain shop for used cars, pay a tiny fraction of their wealth in income tax, raise children who are often unaware of their family's wealth until they are adults, and, above all, reject the big-spending lifestyles most of us associate with rich people. In fact, you will learn that the flashy millionaires glamorized in the media represent only a tiny minority of America's rich. Most of the truly wealthy in this country don't live in Beverly Hills or on Park Avenue-they live next door.

Thomas J. Stanley was an author, lecturer, and researcher who started studying the affluent in 1973. He died in 2015. William D. Danko is professor emeritus at the School of Business, State University of New York at Albany. Sarah Stanley Fallaw, Ph. D., is president of DataPoints, a company that provides assessments based on the research and data of her father, Thomas J. Stanley.