Sidney Chambers and the Shadow of Death (Grantchester #1) (Paperback) 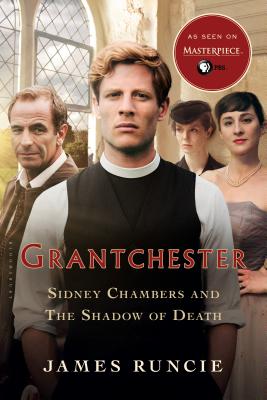 This is book number 1 in the Grantchester series.

The first of the Grantchester Mysteries, and inspiration for the PBS/Masterpiece television series, finds Vicar Sidney Chambers beginning his career, as both a spiritual leader and a detective.

It is 1953, the coronation year of Queen Elizabeth II . Sidney Chambers, vicar of Grantchester and honorary canon of Ely Cathedral, is a thirty-two-year-old bachelor. Tall, with dark brown hair, eyes the color of hazelnuts, and a reassuringly gentle manner, Sidney is an unconventional clerical detective. He can go where the police cannot.

Together with his roguish friend, inspector Geordie Keating, Sidney inquires into the suspect suicide of a Cambridge solicitor, a scandalous jewelry theft at a New Year's Eve dinner party, the unexplained death of a jazz promoter's daughter, and a shocking art forgery that puts a close friend in danger. Sidney discovers that being a detective, like being a clergyman, means that you are never off duty, but he nonetheless manages to find time for a keen interest in cricket, warm beer, and hot jazz-as well as a curious fondness for a German widow three years his junior.

With a whiff of Agatha Christie and a touch of G. K. Chesterton's Father Brown, The Grantchester Mysteries introduces a wonderful new hero into the world of detective fiction.

James Runcie is an award-winning film-maker, playwright and literary curator. He is the author of twelve novels that have been translated into twelve languages, including the seven books in the Grantchester Mysteries series. He has been Artistic Director of the Bath Literature Festival, Head of Literature and Spoken Word at the Southbank Centre, London, and Commissioning Editor for Arts on BBC Radio 4. He is a Fellow of the Royal Society of Literature. He lives in Scotland.

"No detective since Father Brown has been more engaging than Canon Sidney Chambers. Perfect company in bed." —Salley Vickers

"Inspector Morse would appear to have a rival." —Scotland on Sunday

"A charmingly effective tale of detection . . . evoking oodles of churchy village atmosphere, circa 1953, provides a satisfyingly old-fashioned read." —The Times

"The clerical milieu is well rendered as an affectionate eye is cast over post-war England--a perfect accompaniment to a sunny afternoon, a hammock and a glass of Pimm's." —Laura Wilson, Guardian

"James Runcie has written the coziest of cozy murder mysteries. Taken individually, each of these clerical whodunits poses a clever puzzle for armchair detectives. Viewed as a collective study of British life as it was lived when Elizabeth II first ascended the throne, these stories present a consistently charming and occasionally cutting commentary on a postwar landscape full of industry, promise and concrete." —New York Times Book Review

"Full of witty phrases to delight the reader . . . This entertaining first volume about Canon Chambers will have Runcie's readers longing for the next." —Peggy Woodford, Church Times

"An evocation of a more genteel era . . . Chambers turns out to be a winning clergyman-sleuth, and Runcie's literary authority is repeatedly demonstrated in the construction of his elegant tales. In fact, it is the plotting that really distinguishes this collection, and will make many more readers more than ready to follow the God-fearing hero from the coronation of Elizabeth II in 1953 to the wedding of Charles and Diana in 1981 . . . there is no denying the winning charm of these artfully fashioned mysteries." —Independent

"Gentle criminal entertainment with a pleasantly old-fashioned feel to it." —Andrew Taylor, Spectator

"The plots are intriguing . . . While the diminutive priest detective created by G. K. Chesterton led the way, Sidney Chambers is set fair to be a worthy successor. In a sceptical age this is quite an achievement. Then again, the author is a son of an archbishop. And who better to portray the sleuth in ecclesiastical clothing?" —Barry Turner, Daily Mail

"At last, an Anglican Father Brown . . . Each tale is beautifully crafted and surprising. I hope for many more volumes." —A.N. Wilson, Spectator