In the Lion's Den: Israel and the World (Hardcover) 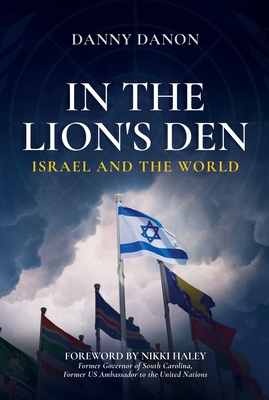 Israeli statesman and former UN Ambassador, Danny Danon, presents a compelling vision of Israel’s future as a major player on the global stage.

In the Lion’s Den is a book about the life events that encouraged Danny Danon to pursue his chosen career path and take his distinct and direct approach during his time as Knesset Member and later on in his political career. It is a book that tells the story of his journey to the United Nations and the key events that occurred during the five years he served as Israel’s 17th Permanent Representative to the UN.

In the Lion’s Den draws on the unique perspective of a man who has spent his entire career in his nation’s public service. Danon shares his experiences on the front lines of Israel’s global presence––the successes as well as the disappointments. Danon makes a compelling case for an Israel that must be proud of its identity and faith; forge relationships with diverse peoples; make autonomous domestic decisions; and determine its own foreign policy.

In this book, Danon lays out a roadmap for Israel’s future on the regional and global stage and outlines the path Israel must follow in order to continue to make a positive contribution to global prosperity and peace and ensure its safety in a fraught region. As the Jewish state enters the next phase of its existence, Danon’s inspiring vision will help Israel fulfill the noble vision of its founders.

Ambassador Danny Danon served as Israel’s 17th Permanent Representative to the United Nations for five years beginning October 2015. He currently holds the post of Chairman of the World Likud. Danon was a member of the Knesset from February 2009 to August 2015. He has held the roles of Knesset Deputy Speaker, Deputy Minister of Defense, Minister of Science, Technology and Space, and  Chair of the Committee of Immigration, Absorption and Diaspora Affairs. Danon holds a BA in International Relations (Magna Cum   Laude) from Florida International University and an MA in Public Policy and Public Administration from the Hebrew University of Jerusalem. He completed his IDF service with the rank of Lieutenant. He is married and the father of three. Danon is also the author of Israel: The Will to Prevail.

“During his five years as Israel’s Ambassador to the UN, Danny Danon surprised his critics and proved time after time that Israel can succeed even in this most challenging of arenas. Danny Danon’s new book, In the Lion’s Den, describes the trials he encountered and the original methods he employed to advance Israel’s interests and present the truth about Israel to the world at the UN. This book is a fascinating, insightful and encouraging read.”
— Senator Joe Lieberman

"Danny Danon and I disagree on much that relates to Israel but both of us champion active discussion. In The Lion’s Den is Danon‘s detailed articulation of his view of a way forward for Israel. It deserves scrutiny and debate, from which Danon has never shied.”
— Ali Velshi, Host “Velshi”, MSNBC

“In the Lion's Den is a fascinating book that explores how international undertakings are woven behind closed doors and how personal relationships are key to the success of any diplomat. Ambassador Danny Danon shows that with determination, wisdom and personal charm, even Israel can succeed in a place as challenging as the United Nations.”
— Ambassador Blanchard, former Permanent Representative and Ambassador of Canada to the United Nations

“Have you ever wondered why the United Nations has devoted more time to tiny Israel than to any other nation on earth? Israeli Ambassador to the UN, Danny Danon gives you the answer in his new book. Instead of being frustrated and outraged, Ambassador Danon chose action and brought moral clarity right into the hall of the UN General Assembly. Clear and persuasive, In the Lion’s Den is a must-read for anyone who seeks to understand the unique role of Israel at the UN and in the world today.”
— Gordon Robertson, President, CBN

“In this riveting life story, which culminates with his five years as Israel’s ambassador to the UN, Danny Danon reveals a great deal about what makes Israel the amazing country it is—and what makes him such a proud Israeli and gifted storyteller.”
— David Harris, CEO, American Jewish Committee