Taking Back Trump's America: Why We Lost the White House and How We'll Win It Back (Hardcover) 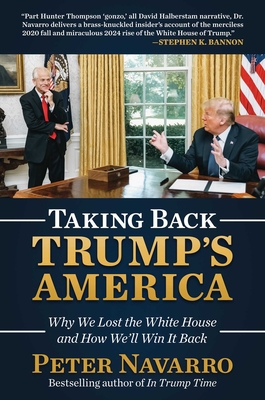 As seen on Tucker Carlson
As heard on Mark Levin

In this follow-up to the breakout bestseller In Trump Time, Peter Navarro explains why Trump lost the White House in 2020 and how he will win it back in 2024—and none too soon.

Steve Bannon, the chief architect of Trump’s 2016 win, describes Taking Back Trump’s America as “a brass-knuckled insider’s account of the merciless 2020 fall and miraculous 2024 rise of the White House of Trump.”

In Peter Navarro’s telling—he was in all of the rooms where it happened—Trump’s fall may be laid squarely at the feet of a coterie of incompetent and disloyal “bad personnel” inside the White House. They continually sought to undermine the commander in chief they putatively served and included everyone from Attorney General Bill Barr, Treasury Secretary Steve Mnuchin, and National Economic Council Directors Gary Cohn and Larry Kudlow, to National Security Advisors H.R. McMaster and John “Dr. Strangelove” Bolton, Jared “Rasputin” Kushner, the Four-Star Traitors in Generals John Kelly and Jim Mattis, and four of the worst chiefs of staff in White House history.

This confederacy of predatory globalists, Never-Trump Republicans, wild-eyed Freedom Caucus nut jobs, and self-absorbed Wall Street transactionalists would constantly delay, disrupt, and deter a set of populist, economic, nationalist, and “tough on China” actions and policies that would have otherwise carried Donald Trump to a landslide victory.

Peter Navarro is one of only three senior White House officials who remained with President Trump from the 2016 presidential campaign to the end of his first term in office. Navarro was director of the Office of Trade and Manufacturing Policy, served as policy coordinator for the Defense Production Act during the pandemic, and was a principal architect of Trump’s tariff, trade, and “tough on China” policies.

Navarro is a noted China scholar, sought-after public speaker, and award-winning professor emeritus at the University of California-Irvine. His numerous books include the bestselling In Trump Time and The Coming China Wars, and he has delivered keynote speeches to audiences around the world.

Navarro holds a Ph.D. in economics from Harvard University, a master’s in public administration from the Kennedy School of Government, and a B.A. from Tufts University. He has appeared frequently on ABC, CBS, NBC, CNN, MSNBC, Fox, Bloomberg, and CNBC.