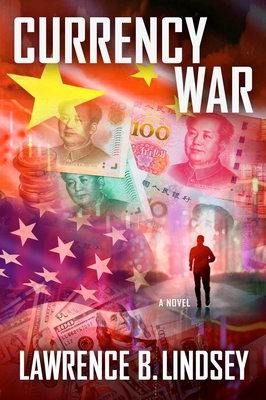 Currency War is an international thriller that only Lawrence B. Lindsey – economist, adviser to presidents, and Washington insider – could tell.

Coleman, chairman of the U.S. Federal Reserve under President Will Turner, realizes this is a harbinger of things to come… a suspicion confirmed by Li Xue, his counterpart in the Chinese government. Li is part of a modernizing movement that is locked in confrontation with a hardline faction headed by General Deng Wenxi. Deng sees the U.S. in a weak economic position and plans to make China the global superpower by replacing the U.S. dollar with the yuan as the world's reserve currency.

So begins a currency war between the United States and China – a war fought in dollars and yuan against a landscape of shifting international alliances and political infighting on both sides. Coleman's marriage is even compromised when his wife – a beautiful, retired MI-6 agent from England – is drawn back into the game of spycraft and intelligence gathering.

As the bloodless war rages, readers are taken on a roller coaster ride through the inner sanctums of power in the world – from the upstairs residence of the White House to the board room of the People's Bank of China; from a high society dinner party in London to the birth of a Political Action Committee at an exclusive Virginia resort; and from the bedrooms of the elite to the forbidden fleshpots of Laos.

Dr. Lawrence B. Lindsey is the president and chief executive officer of The Lindsey Group, an economic advisory firm based in Washington, D.C. and has held leading positions in government, academia, and business. Lindsey served as George W. Bush's chief economic advisor during the then-candidate's 2000 presidential campaign. He later went on to hold top positions in the Bush administration, including assistant to the president for policy development and director of the National Economic Council.

Lindsey also served as special assistant to the president for domestic economic policy during the first Bush Administration and as senior staff economist for tax policy at the Council of Economic Advisers during President Reagan's first term.

From 1997 until 2001 Lindsey was managing director of Economic Strategies, a global consulting firm. From 1991 to 1997, he was a governor of the U.S. Federal Reserve System. And before that, he served five years on the Economics faculty of Harvard University and held the Arthur F. Burns Chair for Economic Research at the American Enterprise Institute.

Lindsey has made a fast moving thriller out of economics. It’s a great read and frighteningly realistic. The well-informed reader might find himself or herself wondering where the fiction ends and the real world begins.
— Mike Pompeo

Larry Lindsey has written an intellectual thriller that appropriately sounds the alarm bells when it comes to China’s diabolical plans for global dominance. In this epic financial page-turner, we see how Lindsey weaves all of the twists and turns of an action thriller with the very real struggle between nations for economic supremacy.  As our world moves closer to Lindsey’s fictional account of what’s likely to happen, Currency War is a must-read!
— J. Kyle Bass

Drawing on his deep experience serving three U.S. administrations, Dr. Lawrence Lindsey has crafted a spellbinding thriller. Filled with international intrigue, Currency War is a gripping ride through deceit and deception at the highest levels of power.
— Rep. Devin Nunes

Dr. Lindsey takes us behind the curtain on one of the most secretive and powerful institutions in the world - the Chinese communist party. His ability to weave real life headlines into this thriller is masterful and an important eye opener to the threats the free world faces in dealing with Communist China.
— Maria Bartiromo

I picked up Currency War to browse through it, and last night when I put it down at about 2:00 a.m., I was more than halfway through it. I will finish it in the next day or so. Congratulations to Lindsey on writing what I think will be a very successful novel. It is important because he takes a dense topic, which is for some of us hard to understand, and tells a story in a wonderful way that makes it terribly interesting.
— Harlan Crow