Pity the Reader: On Writing with Style (Paperback) 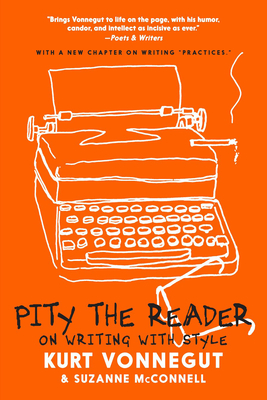 Kurt Vonnegut used to like to say, "Practicing an art form is a way to grow your soul." He would screw up his lips into a prune face after he said this because of how important he believed this idea to be. Pity the Reader is the very embodiment of that idea, a book about writing and life and why the two go together.

It includes rare photos and reproductions, Vonnegut's own account in his own words of how he became a writer and why it matters, and previously untold stories by and about Vonnegut as teacher and friend.

It turns out he was generous to a fault about students' writing, idiosyncratic, a bit tortured and always creative as a teacher, and here in this book that portrait becomes our gateway into getting to know Kurt Vonnegut better than we ever have before as a human being.

Vonnegut recounts that his favorite work of art among all those his children produced "so far" is a letter his daughter Nanette wrote to a disgruntled customer, after he had tormented a new waitress at the restaurant where she had just started working, and then he shares the letter with us. Thus he illustrates his first writing rule: "Find a subject you care about." This book is full of such rare, intimately teachable moments, and they add up to something special. Pity the Reader indeed.

Author, editor, and writing teacher Suzanne McConnell was a student of Kurt Vonnegut’s at the Iowa Writers’ Workshop from 1965 to 1967, when Vonnegut—along with Nelson Algren and other notable authors—was in residence and finishing his masterpiece, Slaughterhouse-Five. Vonnegut and McConnell became friends, and stayed so for the rest of his life. She has published short memoirs of him in the Brooklyn Railand the Writer’s Digest, and led a panel at the 2014 AWP conference titled “Vonnegut’s Legacy: Writing About War and Other Debacles of the Human Condition.” McConnell taught writing at Hunter College for thirty years, and she serves as the fiction editor of the Bellevue Literary Review. Twice nominated for the Pushcart Prize, her fiction also won first prize in the New Ohio Review’s 2015 Fiction Contest, first prize in Prime Number Magazine’s 2014 Awards for Flash Fiction, and second prize in So to Speak’s 2008 Fiction Contest. She lives in New York City and Wellfleet, Massachusetts, with her husband, the artist Gary Kuehn.

Kurt Vonnegut was one of the few grandmasters of American literature, whose novels continue to influence new generations about the ways in which our imaginations can help us to live. Few aspects of his contribution have not been plumbed—fourteen novels, a collection of his speeches, essays, letters, a play—so this fresh self-portrait, written with the aid of a former student, is a bonanza for writers and readers everywhere.

“A love song for the writing life by one of the world’s finest humanist writers, Kurt Vonnegut’s wry and compassionate voice is given a resonant echo chamber here by the wise and abidingly respectful presence of his former graduate student, Suzanne McConnell. Part homage, part memoir, and a 100% guide to making art with words, Pity the Reader: Writing With Style is a simply mesmerizing book, and I cannot recommend it highly enough!” —Andre Dubus III

The blend of memory, fact, keen observation, spellbinding descriptiveness and zany characters that populated Vonnegut’s work is on full display here, in a kind of workshop forum, with explanations by the writer himself, as recorded by a fellow writer, McConnell, who knew Vonnegut for decades. The result is Vonnegut as we’ve never seen him before, a man of kindness and generosity, humility and extraordinary introspection, whose humor and creativity served as a kind of protectorate, a shield, and most importantly a fountain of creativity to quench his life-long thirst for a better, kinder planet. It’s a must read for any young writer." —James McBride, author of the National Book Award-winning novel, The Good Lord Bird

“Pity us not at all! What could be more welcome than Kurt Vonnegut’s acerbic writing advice expertly illuminated by veteran teacher/writer/editor Suzanne McConnell. A timely book for writers, readers, teachers and book-lovers alike. It’s unsentimental, unvarnished, and 100 percent treacle-free. If you’ve longed to be under Vonnegut’s spell once again, this is the book for you.” —Danielle Ofri, MD, author of What Patients Say, What Doctors Hear

"As both biography and artifact, Pity the Reader is priceless. But the practical guidelines on writing well are themselves worth the price of admission, even for those of us who do not write fiction, and even those who do not write at all. Indeed, many aspiring writers pay good money for the kind of advice and insight contained herein, not least of all in the form of tuition at any of the world’s many MFA programs." —Jeremy Justus, Provincetown Arts

"I hate getting advice, personally. This is not that kind of book—it complains grumpily about the discomfort required to write truthfully and it celebrates the long history of art as 'a very human way of making life more bearable.' In short, it reminds us of the important things. Suzanne McConnell takes us eloquently into the joys of rediscovering Vonnegut, in a guide that will be profoundly useful to writers thinking about fiction’s purposes as well as its methods." —Joan Silber, author of Improvement, winner of the National Book Critics Circle Award

"This is such a rich, generous book about writing and reading and Kurt Vonnegut as writer, teacher, and friend, that I find myself at a loss for the right good words. It’s a breeze to read.  Every page brings pleasure and insight. It captures the spirit of the man some of us were lucky enough to know and gives future generations a sense of him as a teacher and writer. It traces how Vonnegut grew as a writer and how his writing took shape. I have read it three times now and find it not only a meticulous homage and worthy memorial to a great human being and a lasting writer, but a true help, for all of us at any age, who yearn to write with style.” —Gail Godwin, bestselling author of A Southern Family among many others novels, and the forthcoming Old Lovegood Girls