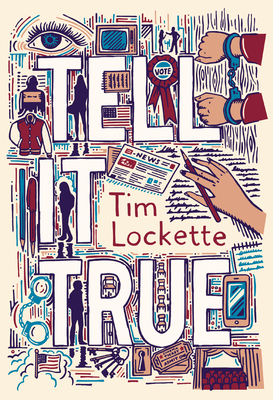 An unlikely high school newspaper editor fights to cover a local murder case and learns what is most important in friendship, in journalism, and in life.

Lisa Rives had higher expectations for sophomore year. Her beauty queen mom wonders why she can't be more like other 15-year-old girls in their small Alabama town. Lisa's Dad, well, she suspects he's having an affair with a colleague at his top-secret job. Her friend Preethy seems to be drifting away, and Lisa spends her schooldays dodging creepy boys and waiting to graduate. Then she finds herself in charge of her high school newspaper, which is the last thing she wanted--school newspapers are for popular kids and club-joiners, not outcasts like her, and besides, the stories are never about anything you actually want to know. But after accidentally tipping the scales in the school election, then deciding to cover a "real" story--the upcoming execution of a local man charged with murder--and becoming a surprise news story herself, Lisa learns some hard lessons about friendship and truth-telling. As Lisa navigates the dilemmas, challenges, and unintended consequences of journalism, she finds her life--and her convictions--changing in ways she couldn't have imagined. Tell It True is a sometimes hilarious, sometimes devastating, always relatable coming-of-age story about the importance of speaking the truth in a world of denial and fake news.

Tim Lockette is a reporter, novelist and teacher of journalists. He has written for Teaching Tolerance, The Anniston (Ala.) Star and The Gainesville (Fla.) Sun, among other publications, and has done extensive reporting on Alabama's death penalty. He is the author of the middle-grade novel Atty at Law. He lives in Alabama with his family.

"Through the act of bearing witness, Lisa evolves from reluctant student editor to a budding journalist. She leaves the death chamber observation room changed, and readers are likely to turn the final page of her story with new perspectives as well."
—Kate Messner, New York Times Book Review

"It is at times very warm, and it is at times deeply serious. It is about locating truth and reporting it honestly. It is about identifying the factual and presenting the 'real' story. It is about what it means to be human. And it is gripping from start to finish."
—Steven Whitton, The Anniston Star

"Fifteen-year-old Lisa Rives seems to want for nothing. Her lovely house, beauty-queen-turned-realtor mom, and engineer dad paint a picture-perfect life in Beachside, AL. But the truth is that her parents are always arguing about a mysterious person named Denice, and her mother is concerned that Lisa is antisocial. An introvert who prefers journalism over friends, Lisa doesn't dress or carry herself in a way that pleases her Southern social butterfly mom; Lisa dons dark baggy clothes year-round and hides behind her long black hair. Her best friend Preethy is the only one who seems to understand. Wanting to promote truth and honesty in a world of skewed realities, Lisa becomes the editor of her high school newspaper, but she has no idea what she's in for. She nearly ruins the outcome for her school election and appears on CNN as the youngest member of the press to have witnessed a modern-day prison execution. Peppered with a diverse cast of characters, this novel tackles sexual harassment, the death sentence vs. life without parole, and the reliability of social and news media.
VERDICT: Fans of thrillers and truth-seeking protagonists will enjoy this fast-paced coming-of-age read, which lends a voice to the call for a more conscious society."
—School Library Journal

*"A 15-year-old journalist gets a schooling in the power—and responsibility—of the press.
"Setting up and then deftly tweaking expectations the way he did in his debut, Atty at Law (2020), Lockette pitches self-styled “brainy rebel” Lisa Rives into a whirl of hard choices and gut checks after she takes over editorship of her school’s paper as, mostly, a favor to her bestie (and the paper’s only other employee), Preethy Narend. Her first (but far from last) lesson in journalism’s hazards and rewards comes after she asks the two candidates for class president to identify with a political party. Her question recasts the election as a contest between a dedicated do-gooder focused on sexual equality in school sports and a Donald Trump mini-me—who, this being red-state Alabama—wins in a landslide. But Lisa has much bigger fish to fry after discovering that state law seemingly gives her the right to attend a convicted killer’s upcoming execution. Could she go? Should she? The blowback both in and beyond school when news of her formal request gets out includes national attention, a quick suspension, and, toughest of all, conflict with Preethy. But Lisa finds some unexpected allies, notably her mom, who turns out to be far more than the shallow stereotype her Southern belle persona suggests. The cast defaults to White, excepting Preethy’s Indian family and a minor Black character.
"Wry, engrossing, even occasionally funny—right up to a gut-wrenching capper."
—Kirkus Reviews, starred review

"Like the best journalism, Tim Lockette’s novel, Tell it True pulls no punches. It refuses to sugar coat the realities of being a teenager—family struggles, friendship, the feeling that you don’t belong—while also challenging readers to think about what it means to have integrity in a world that often rewards looking the other way. Laugh-out-loud funny and painfully real, Tell it True asks you to see the world differently—to give a damn."
—Bryan Bliss, National Book Award Long-Listed Author of We’ll Fly Away

"Tell it True is a compelling look at what it means to seek the truth, no matter where it will lead. Its bold, clear-eyed heroine goes on a journey from cynical high school outsider to ‘real’ journalist, and her hard-won wisdom will stay with you."
—Lindsey Klingele, author of The Truth Lies Here

"When students ask: 'What I can do?' I pull this book off the shelf. It's a wonderful story with a powerful message for young people about their role in today's media environment. Lisa is an insightful, easy-to-cheer for main character. Her journey is both extraordinary by book's end but also relatable to middle and high school students. The book had sparked many discussions with my eighth grade about the criminal justice system, the role of the news, and the power of an individual to affect change."
—Jason Mayfield, Columbiana Middle School, Alabama