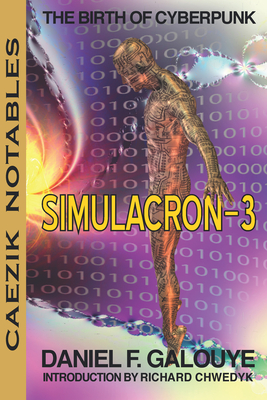 A CAEZIK Notable book. CAEZIK Notables is a series of speculative-fiction books marking important milestones in science fiction or fantasy. Each book published in the series has a new introduction highlighting the book's significance within the genre.

In the 1960's, before anyone had even conceived of the concept of virtual reality, before computers were even in main-stream thought, Daniel F. Galouye imagined the unimaginable. In doing so, he wrote one of the most influential science fiction books of the day, and one that continues to not only influence modern writers but continues to resonate with science fiction readers everywhere.

He conceived of a world that exists only virtually...one of the first stories about virtual reality. This is Matrix, decades before Matrix was conceived.

Douglas Hall is part of a team that builds an artificial environment to simulate reality.

This enables them to get public opinion polls without waiting for the opinions of people around them. But then something goes terribly wrong and his partners on the program start disappearing.

But is it a simulated disappearance, or is someone out to get them all? And what is the true nature of reality?

Stories based on Simulacron-3 have been adapted for both television and movies, and the book is considered a favorite of many of the masters of science fiction.