Democrazy Version 2020: A Warning to All U.S. Citizens (Hardcover) 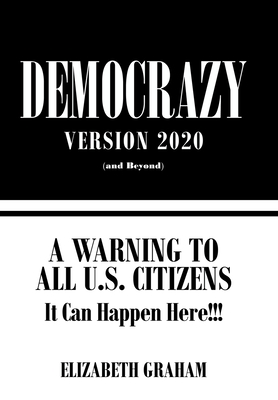 A WARNING TO ALL U.S. CITIZENS. Find out how Donald J. Trump used a dictator's playbook in his efforts to turn our democracy into a totalitarian country - led by one man. This book explains why our democracy is still not safe.

Brain-washing was developed in totalitarian countries, was used extensively by Hitler to convert a peaceful society into hateful, violent, ethnic-cleansing assassins. Putin lived and worked in Germany for many years as a Russian spy and learned brain-washing as well as other spying skills - how to hook or bribe unsuspected victims by using loans or favors. These same type of brain-washing techniques were surprisingly used by Trump in the United States by repeating hateful lies over and over. In the year 2020, violence and murders increased by 30% and there were over 7,700 hate crimes - more than ever before in the history of the U.S.

No elected member of the Russian DUMA votes against President Putin because they fear for their lives or for their family's wellbeing. The entire elected U.S. Senate Republicans from 2016 to 2020 agreed with former President Trump on all issues. This is a dictatorship and not a democracy when a leader rules a country by instilling fear in elected officials so they consistently do as he wishes. One U.S. Republican Senator who voted to impeach Trump now has 24-hour protection, fears for his family's safety, and will not run for re-election - this comparison cannot be ignored.

Trump sold his soul - and our country - to the devil when he did business with or borrowed money from a long list of ruthless Russian business men - who ALL work for Putin. It "appears" that his desperate need for money or his massive ignorance about business with Russians probably resulted in a very typical Russian spy trap. Trump was probably hooked and blackmailed - therefore he created the "big lie", perhaps used a group called Psy-Group to secretly social market this disinformation, and then instigated an attack on our Capitol in an attempt to overthrow the 2020 election. He was desperate. The presidency and control of our democracy was potentially his one and only safety net.

For almost twenty-five years, I lived and worked in the former Soviet Union, then Russia, Central Asia and a long list of other communist or dictatorship countries. I have firsthand experience with how Russia operates and their daily infiltration of the United States - who Putin blames for the downfall of the Soviet Union. The Cold War never ended in the mind of Vladimir Putin.