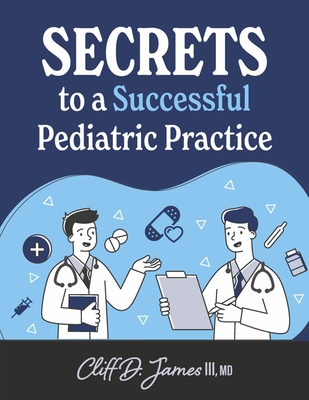 Secrets to a Successful Pediatric Practice takes a pediatrician through the entire process of building a practice, either starting or turning around. It discusses how to find the right location, hiring staff, efficiency of work flow, advertising, networking, increasing profits and proper work balance.

Cliff James lives in Louisville, TN with his wife Kristi, sons Dalton, Tyler and Kaden, as well as some critters. He works in a busy pediatric practice and has the time of his life doing what he knows he was meant to do…take care of children. He is the founding physician of Kids Central Pediatrics and the author of the books: A First Time Parent's Survival Guide: A How-To-Manual for the First Two Years and The Big Book of Why for Parents.

My story started September 30, 1969. I remember it being a warm, sleepy experience when I was suddenly awoken to bright lights, loud noises, and someone smacking me on my bootie. It was then I realized I was naked as a jaybird and have had a fear of public nudity ever since. Some guy with one foot in the grave was holding me by one foot and I saw a smiling tired lady with long, dark hair and a dude with a silly smile was called and asked what my name should be. Obviously not in his most creative mood he just gave his name a slapped another number at the end of the name.
I grew up in the middle of nowhere surrounded by children, not because there were lot of people out there, but because the tired lady and guy with the silly smile just thought they should have a whole lot of kids. For some reason all the kids they had except me were deformed little boys that were missing some parts, so we called them sisters. My dad, the guy with the silly smile, was a hard worker, mom was making home (her job had some kind of title like that) and us five kids were busy making lots of messes and a bunch of noise.
My grandma told me that I was going to grow up and become a pediatrician and it seemed like a good idea. I attended West Texas State University and obtained a degree in Biology. With this degree you were given the choice of starving to death or continuing your education, so I elected to head off to medical school. I started medical school at Texas Tech Health Science Center in Lubbock, TX. Somehow, I managed to survive and thrive in medical school in spite of violating all the dress codes and known stereotypes of medical students. When I finished medical school, it was painfully obvious that I was still an idiot, so I moved to the next step of becoming a pediatrician and went to Cleveland, OH to spend three years as an indentured servant in residency, but I did learn a bunch about pediatrics.
In July of 2000 I started practicing pediatrics in Oak Ridge, TN where I have been ever since.