Choices Under Duress of the Holocaust: Benjamin Murmelstein and the Fate of Viennese Jewry, Volume I: Vienna (Hardcover) 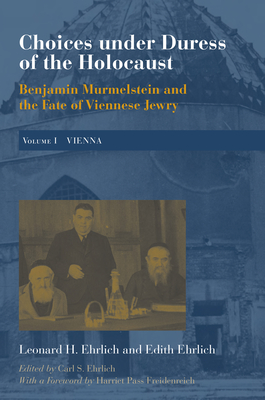 In 1973, Leonard and Edith Ehrlich chose to undertake a daunting task that would ultimately become their greatest work: conducting over thirty years of meticulous research to investigate and document Vienna's Jewish community and its leadership during the Holocaust. Inescapably, this path led them to the controversial figure of Benjamin Murmelstein, Viennese rabbi and later Judenrat council elder at Theresienstadt. As a youth in Vienna during the 1930s, Leonard Ehrlich grew up knowing and respecting Murmelstein, who was the rabbi for his bar mitzvah. Ehrlich and his family would flee Vienna for the United States two months after the beginning of World War II; upon hearing post-war accounts of Murmelstein's involvement in Nazi atrocities, Ehrlich attempted to reconcile those accounts with his experience of Murmelstein as a thoughtful, devoted intellectual. Leonard Ehrlich and his wife Edith, like Leonard a Viennese refugee and doctor of philosophy, thus began an intellectual magnum opus that would seek to interrogate a number of basic assumptions of Holocaust scholarship and critical thought. The Ehrlichs would conduct painstaking historical research not only in archives but also in interviews with subjects, not the least of whom was Murmelstein himself, who had settled in Rome after the conclusion of the war. The first volume focuses on the Jewish community of Vienna during the period of 1938 to 1942. Choices under Duress of the Holocaust is most certainly a historical work, but it is also a philosophical work, in which "duress" and "choice" are considered fully in their relevant contexts. It is, then, a history of the destruction of the Jewish community of Vienna and an examination of the performance of the Jewish leadership in its dealings with the Nazis on behalf of the Jews. But it is also the positing of a question, the opening of a space to consider the nuances of consent, complicity, and condemnation.