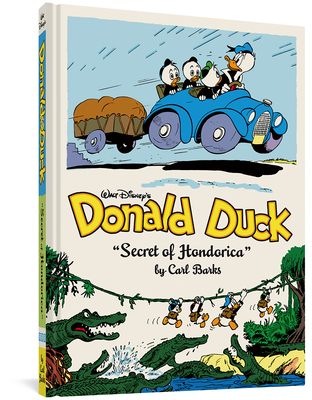 This is book number 17 in the The Complete Carl Barks Disney Library series.

The Disney Ducks go on a perilous jungle quest and start a risky business!

When Uncle Scrooge loses some vital papers in a plane crash in the jungles of Hondorica, he sends Donald and his nephews to rescue them. But wily cousin Gladstone Gander gets wind of the expedition and decides to get there first — to claim the reward for himself! Then Donald becomes a sales agent for the Break & Bruise Insurance Co. and sells a policy to Uncle Scrooge. But Scrooge is determined to collect, so Donald has to become his bodyguard to protect him from harm. And when the Junior Woodchuck boys are challenged by the Chickadee Patrol girls to build a wilderness bridge, Donald’s efforts to help put him in danger — and the boys have to choose between rescuing him and winning the contest.

David Gerstein is an animation and comics researcher, writer, and editor best known for his work with The Walt Disney Company and its licensees. His published projects include Uncle Scrooge and Donald Duck: The Don Rosa Library (Fantagraphics, 2014-2018) and Mickey Mouse: The Ultimate History (with J.B. Kaufman; Taschen, 2018). He lives in North Carolina.