The Return Of Snow White And The Seven Dwarfs (Hardcover) 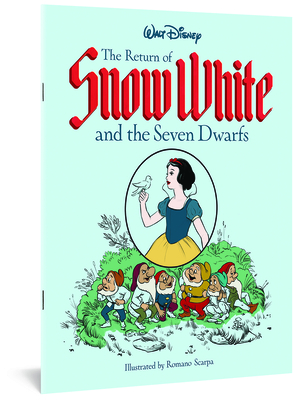 The adventures of Disney's Snow White continue in this graphic novel, which is being released in the US to celebrate the animated film's 80th anniversary.

Prince Charming leaves Snow White in the care of the Seven Dwarfs while he leaves for an expedition with the king. But the Evil Queen is back! Then, the Dwarfs build a special diamond throne for the Princess, but when it vanishes, they set out to find the thief. Also: what is the secret of the eighth dwarf? Jiminy Cricket makes a guest appearance! Perfect for Disney fans of all ages.

Romano Scarpa (1927–2005) trained as a fine artist and an architect. He left his own animation studio in 1953 to draw original comics stories for Walt Disney’s Italian publisher. He is most famous for his stories starring Mickey Mouse, Donald Duck, and Snow White.

Italian writer Guido Martina (1906–1991) was also a documentarist and a teacher.