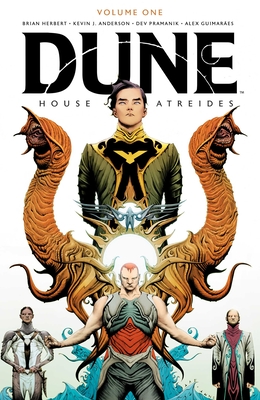 The New York Times best-selling Dune: House Atreides comes to comics for the first time, as adapted & scripted by the novel's co-writers Brian Herbert and Kevin J. Anderson, from the prequel novel based on Dune creator Frank Herbert’s notes and original vision.

THE OFFICIAL PREQUEL TO THE GROUNDBREAKING DUNE.

Welcome to the far future on the desert planet Arrakis where Pardot Kynes seeks its secrets. Meanwhile, a violent coup is planned by the son of Emperor Elrood; an eight-year-old slave Duncan Idaho seeks to escape his cruel masters; and a young man named Leto Atreides begins a fateful journey. These unlikely souls will come together as renegades and soon discover that fate has decreed they will change the very shape of history.

Brian Patrick Herbert (born June 29, 1947) is an American author who lives in Washington state. He is the elder son of science fiction author Frank Herbert.

Brian Herbert's novels include Sidney's Comet, Prisoners of Arionn, Man of Two Worlds (written with his father), and Sudanna Sudanna. In 2003, Herbert wrote a biography of his father titled Dreamer of Dune: The Biography of Frank Herbert. The younger Herbert has edited The Songs of Muad'dib and the Notebooks of Frank Herbert's Dune. Brian has also created a concordance for the Dune universe based on his father's notes, though, according to the younger Herbert, there are no immediate plans to publish it.