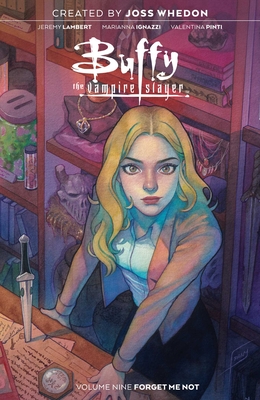 The most ambitious event in Buffy The Vampire Slayer history begins HERE!

THE BIG BAD OF THE MULTIVERSE REVEALED! The most ambitious event in the history of Buffy The Vampire Slayer begins here as the truth of the Multiverse is laid bare and the ultimate Big Bad arrives in Sunnydale! Even as Buffy, Willow, and Giles finally begin to fully understand the scope of the endless war the Slayers are part of, various other factions continue to try and shape the outcome to their benefit. The Council has worked too long and too hard to let a rogue Watcher and rogue Slayer stop them from achieving their plans for the Multiverse. But with aid from some unexpected allies and the new Scoobies, Buffy may yet be able to prove she is the Chosen One. Will she be able to unite enough allies together to stop the ultimate Big Bad? Writer Jeremy Lambert (Doom Patrol) and artist Marianna Ignazzi (Unkindness of Ravens) kick off the most ambitious, universe-spanning event in Buffy The Vampire Slayer history! Collects Buffy the Vampire Slayer #29-32

Jeremy Lambert is a writer and filmmaker from Bowie, Maryland, now residing in Los Angeles, California. He currently writes BUFFY THE VAMPIRE SLAYER for BOOM! Studios. He co-wrote DOOM PATROL: WEIGHT OF THE WORLDS with Gerard Way for DC Comics, the graphic novel GOOSEBUMPS: MONSTERS AT MIDNIGHT for Scholastic/IDW, TSUM TSUM KINGDOM for IDW/Disney, and a story for Kodansha Publishing’s ATTACK ON TITAN, among others. He is currently writing a graphic novel trilogy to be published in 2022. He worked as Head of Production for Breakwater Studios, Ltd. from 2017 through the end of 2020 and continues to work in their Story & Development department. Prior to his writing and filmmaking career, he was an extras casting director, working on films and television shows like TRUE BLOOD, LA LA LAND, FURIOUS 7, MAGIC MIKE, TRUE DETECTIVE, and others.