Tearing Us Apart: How Abortion Harms Everything and Solves Nothing (Hardcover) 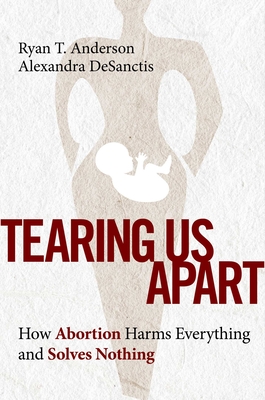 Hope in the Ruins of Roe

Now that the Supreme Court has overturned Roe v. Wade and returned abortion law to the democratic process, a powerful new book reframes the coming debate: Our fifty-year experiment with unlimited abortion has harmed everyone—even its most passionate proponents.

Women, men, families, the law, politics, medicine, the media—and, of course, children (born and unborn)—have all been brutalized by the culture of death fostered by Roe v. Wade.

Abortion hollows out marriage and the family. It undermines the rule of law and corrupts our political system. It turns healers into executioners and “women’s health” into a euphemism for extermination.

Ryan T. Anderson, a compelling and reasoned voice in our most contentious cultural debates, and the pro-life journalist Alexandra DeSanctis expose the false promises of the abortion movement and explain why it has made everything worse. Five decades after Roe, everyone has an opinion about abortion. But after reading Tearing Us Apart, no one will think about it in the same way.

Ryan T. Anderson, Ph.D., the president of the Ethics and Public Policy Center in Washington, D.C., is the author of When Harry Became Sally: Responding to the Transgender Moment and Truth Overruled: The Future of Marriage and Religious Freedom. His groundbreaking work on marriage and religious freedom work has been published by the New York Times, the Washington Post, the Wall Street Journal, and a multitude of popular and academic journals and has been cited in two Supreme Court opinions. A graduate of Princeton and Notre Dame, he is the St. John Paul II Teaching Fellow in Social Thought at the University of Dallas and a regular guest on major network news programs. He lives on a small family farm in Virginia with his wife and three children.

Alexandra DeSanctis, a visiting fellow at the Ethics and Public Policy Center, is a staff writer at National Review and a widely published journalist covering politics, abortion, the pro-life movement, elections, and religion. She regularly appears on National Review’s “The Editors” podcast and speaks to students and pro-life groups around the country. Her work has appeared in the New York Times, the Wall Street Journal, the Washington Post, The Atlantic, the Catholic Herald, the Human Life Review, the Washington Examiner, the Daily Signal, America, Public Discourse, and Verily magazine. A graduate of Notre Dame and a former William F. Buckley Jr. Fellow in Political Journalism at the National Review Institute, she lives in Northern Virginia with her husband.

“Ryan T. Anderson and Alexandra DeSanctis do America a true service, laying out the reasons why abortion is a grave wrong on every level—a wrong that sears at the soul of our country. It is a clarion call to decency and for a return to a morality that values every human life.”

—BEN SHAPIRO, host of The Ben Shapiro Show and editor emeritus of The Daily Wire

“In their brilliant new book, Anderson and DeSanctis...decisively rebut the various claims and arguments that abortion (or a ‘right’ to abortion) can be justified....And they chart the way forward in a post–Roe v. Wade world....”

“A riveting, thought-provoking, and well-reasoned analysis of how our nation has permitted the great human-rights abuse of abortion. Any activist, advocate, or concerned American will not only better understand how we got here, but be encouraged that restoring justice is possible if we are willing to pursue it.”

“Lucid, powerful, and penetrating...an evidence-based case for how abortion in America has harmed children, women, families, the practice of medicine, vulnerable communities, the rule of law, politics, and culture. This is required reading for anyone who wants to think seriously about how to govern ourselves in this vexed domain and, more deeply, how to care rightly for one another.”

“These two exceptional thinkers flesh out the most basic reality of abortion: it harms. Examining the relationship of mother and child, mother and father, doctors and healing, media and truth, and more, they show (with compelling evidence) that abortion is never, ever, ever a positive thing.”