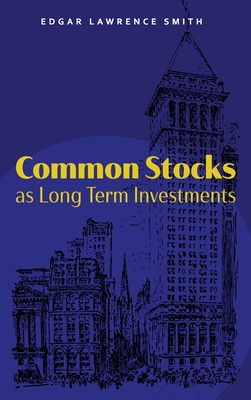 Common Stocks as Long Term Investments (1924) by Edgar Lawrence Smith proved for the first time that stocks outperformed bonds in long-term stock market investments. Before Smith's work, the prevailing wisdom regarding investing stated that bonds were a safer investment. Conservative investors would allocate a large portion of their investments to bonds, relying on the annual rate of interest as a sure bet. Stocks, on the other hand, were viewed as risky speculations, due to the market's volatility.

Smith himself held that view, before beginning the research for this book. As he told his Harvard class at their 50th reunion, "I tried to write a pamphlet on why bonds were the best form of long term investment. But supporting evidence for this thesis could not be found."

Edgar Lawrence Smith (b. 1882, d. 1971) was a Harvard-educated economist and investment manager. While working as an advisor to the brokerage firm Low, Dixon & Company, he began to look at the relative performance of bonds versus stocks.

Through 11 case studies completed for Common Stocks as Long Term Investments, Smith proved that the prevailing wisdom in favor of bonds over stocks was wrong. In 10 out of the 11 cases, a $10,000 investment in arbitrarily chosen stocks would have outperformed an equal investment in high-grade bonds. And in the 11th case, the lower return was impacted by two market panics and inflation (in the years 1866-1885).

How does Smith account for the better performance of stocks over time? To begin, stocks often grow with or even in excess of inflation. Returns on bonds, on the other hand, lose purchasing power over time due to inflation. In addition, the general march of progress through population growth and improved standards of living over time leads to greater demand for products and services. The trajectory of progress often leads to growth that outpaces inflation, making stocks a better long-term investment.

Smith's work supports a long-term investment strategy. He shows that over 15 years, the value of stocks sees a loss only 1.1% of the time. While they may be subject to short-term fluctuations, their long-term reliability makes them a smart investment as part of a balanced portfolio. Smith does not advocate against bonds. He merely suggests that investors give heavier weight to stocks than bonds, rather than the other way around.

Famous economists Irving Fisher and John Maynard Keynes praised the book. Keynes invited Smith to join the Royal Economic Society, and Fisher directly stated that he had more confidence in common stocks due to Smith's work. Unfortunately, Smith, Irving, Keynes, and the rest of the world were about to discover that while stocks were generally the best long-term investments, there could still be ruinous market fluctuations.

The Wall Street Crash of 1929 was the ruin of many individuals and businesses. Keynes' fortune was nearly wiped out. Irving lost over $100M in today's dollars. And Smith himself had to sell his own mutual fund firm, Investment Managers Company. In the subsequent years, Smith focused instead on research and writing, rather than working directly in the financial industry.

But the long-term reliability of common stocks still holds. Even accounting for large market downturns, a diversified investment portfolio weighted to common stocks is still the clear financial winner when we look at an investment strategy over decades.

While Smith suffered from the Crash of '29 (along with the rest of the country, including great economists), his ideas have been backed up since he first published, by Alfred Cowles in 1939 and again by Rex Sinquefield in 1976.