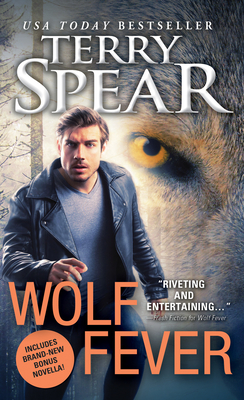 This is book number 2 in the Silver Town Wolf series.

Where wolves run wild and men have nothing more to prove...

Growing up in Silver Town, human nurse Carol Woods never imagined that the local hospital specialized in treating werewolves--that is until an attack from a werewolf lands her in the hospital and into a job. Though Carol appreciates the opportunity, much to her pack leader's growing annoyance, she's resisting shifting. Not only because her on-again, off-again psychic abilities have made her leery of losing control of her body, but because they're telling her that a virus attacking the pack may leave them unable to return to human form.

Pack leader Darien Silver is putting pressure on Carol to mate, so she'll have someone to supervise her shifting and prevent her from giving away the pack's secret. But the one man who interests her, sexy gray pack leader and private investigator Ryan McKinley--doesn't believe in her premonitions or their future together, unless she's willing to overcome her fears and shift.

Only when werewolves infected with the virus shift in an effort to shake the disease and then can't shift back, is Ryan convinced of her abilities--but will it be too late for Carol and Ryan to save their packs from becoming wolves forever?

"Riveting and entertaining...Wolf Fever makes one want to devour all of the rest of Terry Spear's books."--Fresh Fiction
" Spear's] writing is pure entertainment."--The Long and Short of It
"A terrific suspense...enough action to keep a reader fascinated."--Night Owl Reviews Top Pick