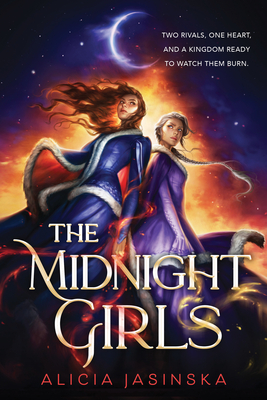 In a snow-cloaked kingdom, two wicked rivals secretly compete for the pure heart of a prince, only to discover they might be falling for each other.

Karnawal season is a time for mischief and revelry. For the next few weeks, all will be wintry balls, glittery disguises, and nightly torch-lit sleigh-parties.

Unbeknownst to the merrymakers, two uninvited girls join the fun. Zosia and Marynka are drawn to each other the moment they meet, until they discover they're rivals, who both have their sights set on the prince's heart. If one consumes a pure heart, she'll gain immeasurable power. Marynka plans to bring the prince's back to her patron in order to prove herself. While Zosia is determined to take his heart and its power for her own.

Their ambition turns into a magical contest with both girls vying to keep the prince out of the other's grasp, even as their attraction to one another grows. But their attempts on his life draws the attention of the city that would die for him, and suddenly their escalating rivalry might cost them not just their love for each other, but both their lives.

Perfect for fans of:

Praise for The Dark Tide:

"Striking the perfect balance, The Dark Tide demands to be read in one held breath as its tide bears down on all."—Foreword, Starred Review

"The Dark Tide is the dark, queer fantasy of your dreams that's part beauty and the beast, part something entirely new and original... a lush world that begs to be lived in... It's beautiful, and fast paced, and everything I ever want from a fairy tale."—Cat VanOrder, Bookmarks (Winston-Salem, NC)

"Fans of the enemies-to-lovers trope will be ecstatic with this book...The Dark Tide offers an exciting and immersive story with a strong feminist slant that subverts common YA tropes and forges its own original path."—The Nerd Daily

Alicia Jasinska works as a library technician and is an aerialist in her spare time. She hails from Sydney, Australia. She is the author of The Dark Tide and The Midnight Girls. Visit her online at aliciajasinska.com

"Dark and delectable, you'll sink into this tale with utter delight. A magical, immersive and feminist fantasy - I wanted it to last forever. Keep your eyes on Alicia Jasinska." — Amie Kaufman, New York Times, USA Today, and internationally bestselling author

"...a slow-burn romance with murderous heat that fans of BBC’s Killing Eve will devour." — Booklist