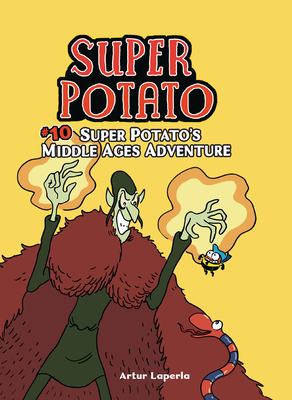 This is book number 10 in the Super Potato series.

Super Potato has lost his giant muscles To take his mind off this tragedy, he agrees to a time-travel mission.

Soon he's searching the Middle Ages to find a scientist stranded in the past. In the foggy swamp of an older era, our hero meets a brave, handsome knight who turned into a serpent. (Say, that sounds familiar . . .) Super Potato agrees to help the knight too, leading to a quest to find the lost scientist and a legendary sorcerer.

This hilarious, irreverent graphic novel series will entice fans of Captain Underpants and The Lego Batman Movie. Spanish cartoonist Artur Laperla presents the adventures of a costumed crime-fighter who turns into a potato and becomes a bigger hero than ever. He faces off against sinister scientists, slugs from space, giant chickens, and more in a series of graphic novels perfect for reluctant readers.