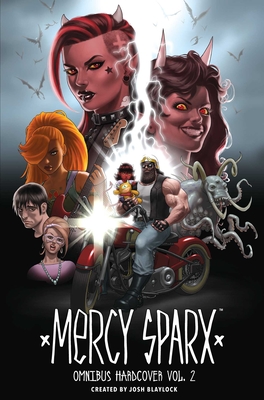 Heaven's unlikely bounty hunter is back! The Mercy Sparx Omnibus Volume 2 is here in a beautiful matte hardcover with UV spotting.

A devil on a "mission from God," Mercy Sparx has spent years ripping halos off of whichever rogue angel Heaven orders her to, but now it appears there's a much bigger problem - her mother!

The malevolent Faustia has found a way onto Earth, and has gotten the upper hand on both Heaven and Hell. To defeat, in Mercy's own words, her "See You Next Tuesday" of a mother, her only chance is to dive deep into her memory, and relive a painful childhood in the underworld of Sheol. Collects every Mercy Sparx comic produced from 2017-2020, the "Who the F# *" encyclopedia, and over 20 pages of brand new content!

Josh Blaylock has been a nationally recognized comic book author and artist since his self-publishing debut in 1996. His fame rose in the early 2000s with the formation of Devil’s Due Comics, and the acquisition of the then-dormant G.I. Joe comic book license, which he re-launched in partnership with Image Comics to the top of the charts, and ignited an entire resurgence of 1980s cartoon properties in the comic book space. In addition to dozens of different comic books written in his career, his creator-owned series Mercy Sparx, published by Devil’s Due, was optioned for film by MGM Studios in 2020. Other notable work includes the political tribute (and satire) Alexandria Ocasio-Cortez and the Freshman Force: New Party, Who Dis? (receiving over 1 billion media impressions around the globe),  the graphic novel  thriller Operation Nemesis, commemorating the 100th anniversary of the Armenian Genocide, and the non-fiction prose How to Self-Publish Comics: Not Just Create Them (made required reading at Savannah College of Art & Design). Outside of comics, Blaylock is a recognized expert in the cryptocurrency space, leading to the creation of The Bitcoin Comic Handbook, a guide to understanding the disruptive technology. Josh’s current active comic book projects continue to be Mercy Sparx and the sci-fi / fantasy series ArkWorld  and The Encoded.

Matt Merhoff is a comic book artist and illustrator from Los Angeles. He is best known for his work on Mercy Sparx with Josh Blaylock. When not drawing he enjoys watching costumed people punch and kick each other.