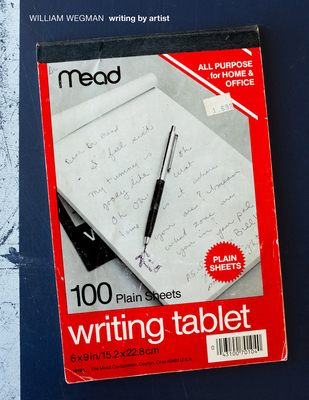 The long-awaited compendium of Wegman's hilarious, ingenious writings and language-centric art, from the early 1970s to the present

While he's famous the world over for his instantly recognizable images of Weimaraner dogs, William Wegman has long been one of Conceptual art's true innovators. Filled with previously unknown and wildly entertaining texts, drawings and early photos, Writing by Artist is the first collection to focus on Wegman's longstanding and deeply funny relationship to language.
This career-spanning edition presents a thematically organized selection of rediscovered writings dating back to the 1970s and 1980s, alongside landmark early photographs and hilarious drawings from throughout his career. All of the works brilliantly incorporate words in one form or another, altering logic and pushing the boundaries of what artist writing can be. Writing by Artist serves as a genuine epiphany for those only familiar with his later work, and a welcome reminder of his madcap inventiveness for the already enlightened. What you do or don't know about William Wegman now conveniently fits into this strangely beguiling book.
William Wegman was born in 1943, in Holyoke, Massachusetts. He received a BFA in painting from the Massachusetts College of Art, Boston, in 1965 and an MFA in painting from the University of Illinois, Champagne-Urbana, in 1967. By the early '70s, Wegman's work was being exhibited in museums and galleries internationally. In addition to solo shows with Sonnabend Gallery in Paris and New York, Situation Gallery in London and Konrad Fisher Gallery in D sseldorf, his work was included in such seminal exhibitions as When Attitudes Become Form and Documenta V, and was regularly featured in Interfunktionen, Artforum and Avalanche magazines. Wegman has created film and video works for Saturday Night Live and Nickelodeon, and his video segments for Sesame Street have appeared regularly since 1989. In 1995, Wegman's film The Hardly Boys was screened at the Sundance Film Festival. Wegman has appeared on The Tonight Show with Johnny Carson and with Jay Leno, The David Letterman Show and The Colbert Report.